Hepatic fibrosis occurs during most chronic liver diseases and is driven by inflammatory responses to injured tissue. Because DCs are central to modulating liver immunity, we postulated that altered DC function contributes to immunologic changes in hepatic fibrosis and affects the pathologic inflammatory milieu within the fibrotic liver. Using mouse models, we determined the contribution of DCs to altered hepatic immunity in fibrosis and investigated the role of DCs in modulating the inflammatory environment within the fibrotic liver. We found that DC depletion completely abrogated the elevated levels of many inflammatory mediators that are produced in the fibrotic liver. DCs represented approximately 25% of the fibrotic hepatic leukocytes and showed an elevated CD11b+CD8– fraction, a lower B220+ plasmacytoid fraction, and increased expression of MHC II and CD40. Moreover, after liver injury, DCs gained a marked capacity to induce hepatic stellate cells, NK cells, and T cells to mediate inflammation, proliferation, and production of potent immune responses. The proinflammatory and immunogenic effects of fibrotic DCs were contingent on their production of TNF-α. Therefore, modulating DC function may be an attractive approach to experimental therapeutics in fibro-inflammatory liver disease. 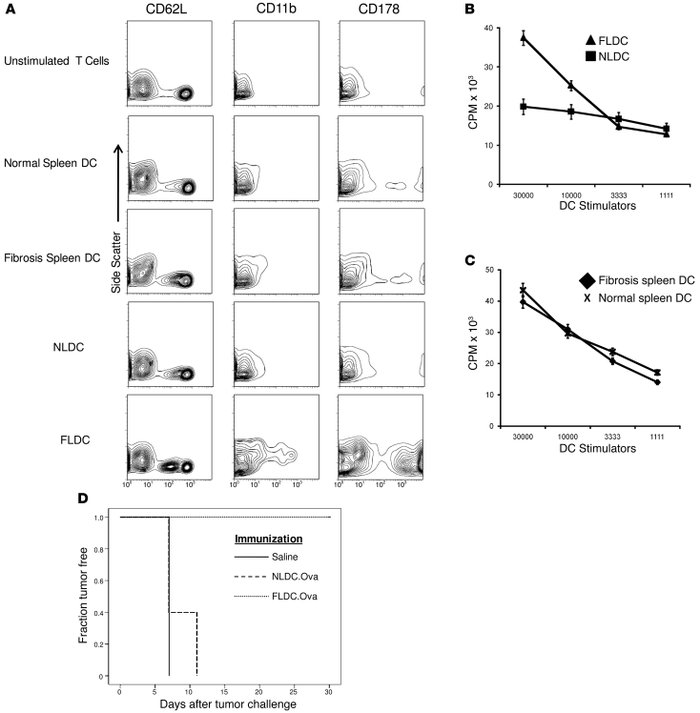 () DCs (3 × 104) from C57BL/6 mice were cocultured with allogeneic BALB/c T cells (2 × 105) for 24 hours. CD3+ T cells were then analyzed by flow cytometry. () FLDCs or NLDCs from C57BL/6 mice were plated with BALB/c T cells for 72 hours in an MLR before pulsing with 3H-thymidine. FLDCs induced nearly twice the T cell proliferation than that of NLDCs at the 2 highest concentrations tested ( < 0.05). () Conversely, splenic DCs from fibrotic mice performed similar to normal spleen DCs. () To test the capacity of liver DCs to mediate tumor protection in vivo, naive mice were immunized twice at weekly intervals with saline or adoptively transferred NLDCs or FLDCs (1 × 105) that had been loaded in vitro with Ova257–264 peptide (5 mice per group). DCs were incubated with 5 μM CpG for 6 hours prior to adoptive transfer immunization. At 1 week after the second immunization, mice were challenged s.c. with EG7 (3.5 × 105 cells). All of the mice immunized with antigen-loaded FLDCs were protected from tumor development, whereas control animals developed s.c. nodules within 11 days of tumor challenge ( < 0.05).