A fundamental goal in cancer research is the identification of the cell types and signaling pathways capable of initiating and sustaining tumor growth, as this has the potential to reveal therapeutic targets. Stem and progenitor cells have been implicated in the genesis of select lymphoid malignancies. However, the identity of the cells in which mature lymphoid neoplasms are initiated remains unclear. Here, we investigate the origin of peripheral T cell lymphomas using mice in which Snf5, a chromatin remodelling–complex subunit with tumor suppressor activity, could be conditionally inactivated in developing T cells. In this model of mature peripheral T cell lymphomas, the cell of origin was a mature CD44hiCD122loCD8+ T cell that resembled a subset of memory cells that has capacity for self-renewal and robust expansion, features shared with stem cells. Further analysis showed that Snf5 loss led to activation of a Myc-driven signaling network and stem cell transcriptional program. Finally, lymphomagenesis and lymphoma proliferation depended upon TCR signaling, establishing what we believe to be a new paradigm for lymphoid malignancy growth. These findings suggest that the self-renewal and robust proliferative capacities of memory T cells are associated with vulnerability to oncogenic transformation. Our findings further suggest that agents that impinge upon TCR signaling may represent an effective therapeutic modality for this class of lethal human cancers. 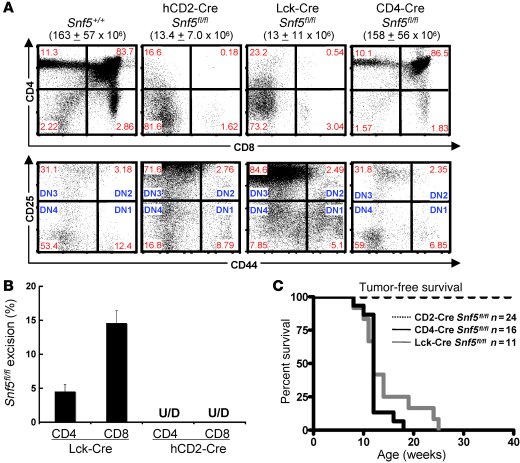 () Flow cytometric analysis of thymocytes from WT (CD2-Cre ), Lck-Cre , hCD2-Cre , and CD4-Cre mice. The numbers above the plots indicate the total numbers of thymocytes averaged from 9 WT mice, 6 Lck-Cre mice, 9 hCD2-Cre mice, and 6 CD4-Cre mice. The top row shows CD4 versus CD8 staining for all thymocytes. The bottom row is gated to show only the CD4–CD8– DN population, and CD25 versus CD44 staining is used to resolve the DN1, DN2, DN3, and DN4 populations, as labeled in blue. The percentage of cells within each quadrant is labeled in red. () CD3+CD4+ or CD3+CD8+ T cells were sorted from the spleens of Lck-Cre mice ( = 8) or hCD2-Cre mice ( = 12), and deletion of the Snf5 allele was quantified by quantitative real-time PCR. Due to known variable penetrance of Lck-Cre expression, some T cells in Lck-Cre mice do not undergo deletion until later stages of development. Consequently, the Lck-Cre mice contain a population of mature peripheral T cells that are Snf5 deficient, a key distinction from the hCD2-Cre mice in which the deleted allele was undetectable (U/D) in peripheral T cells. () Tumor-free survival curve of hCD2-Cre mice ( = 24), Lck-Cre mice ( = 11), and CD4-Cre ( = 16) mice.