The anorexigenic neuromodulator α-melanocyte–stimulating hormone (α-MSH; referred to here as α-MSH1–13) undergoes extensive posttranslational processing, and its in vivo activity is short lived due to rapid inactivation. The enzymatic control of α-MSH1–13 maturation and inactivation is incompletely understood. Here we have provided insight into α-MSH1–13 inactivation through the generation and analysis of a subcongenic mouse strain with reduced body fat compared with controls. Using positional cloning, we identified a maximum of 6 coding genes, including that encoding prolylcarboxypeptidase (PRCP), in the donor region. Real-time PCR revealed a marked genotype effect on Prcp mRNA expression in brain tissue. Biochemical studies using recombinant PRCP demonstrated that PRCP removes the C-terminal amino acid of α-MSH1–13, producing α-MSH1–12, which is not neuroactive. We found that Prcp was expressed in the hypothalamus in neuronal populations that send efferents to areas where α-MSH1–13 is released from axon terminals. The inhibition of PRCP activity by small molecule protease inhibitors administered peripherally or centrally decreased food intake in both wild-type and obese mice. Furthermore, Prcp-null mice had elevated levels of α-MSH1–13 in the hypothalamus and were leaner and shorter than the wild-type controls on a regular chow diet; they were also resistant to high-fat diet–induced obesity. Our results suggest that PRCP is an important component of melanocortin signaling and weight maintenance via control of active α-MSH1–13 levels. 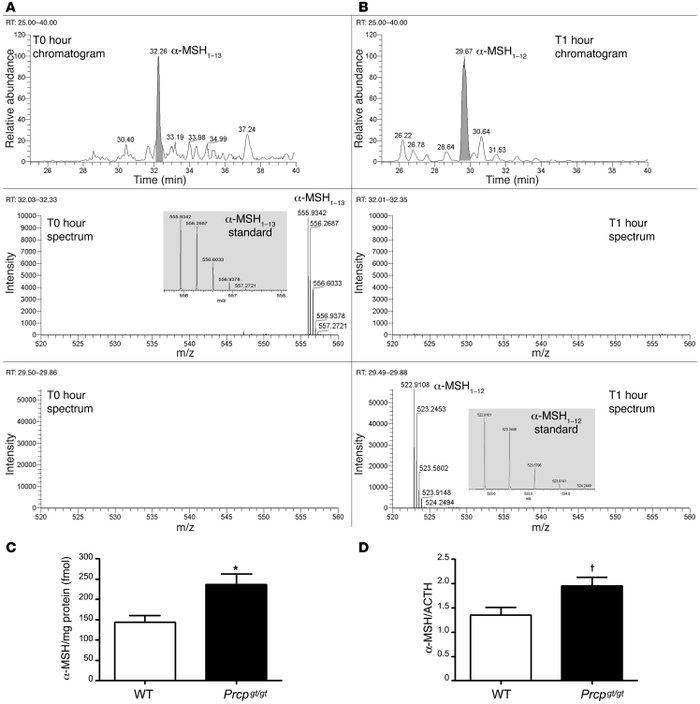