Pulmonary fibrosis, in particular idiopathic pulmonary fibrosis (IPF), results from aberrant wound healing and scarification. One population of fibroblasts involved in the fibrotic process is thought to originate from lung epithelial cells via epithelial-mesenchymal transition (EMT). Indeed, alveolar epithelial cells (AECs) undergo EMT in vivo during experimental fibrosis and ex vivo in response to TGF-β1. As the ECM critically regulates AEC responses to TGF-β1, we explored the role of the prominent epithelial integrin α3β1 in experimental fibrosis by generating mice with lung epithelial cell–specific loss of α3 integrin expression. These mice had a normal acute response to bleomycin injury, but they exhibited markedly decreased accumulation of lung myofibroblasts and type I collagen and did not progress to fibrosis. Signaling through β-catenin has been implicated in EMT; we found that in primary AECs, α3 integrin was required for β-catenin phosphorylation at tyrosine residue 654 (Y654), formation of the pY654–β-catenin/pSmad2 complex, and initiation of EMT, both in vitro and in vivo during the fibrotic phase following bleomycin injury. Finally, analysis of lung tissue from IPF patients revealed the presence of pY654–β-catenin/pSmad2 complexes and showed accumulation of pY654–β-catenin in myofibroblasts. These findings demonstrate epithelial integrin–dependent profibrotic crosstalk between β-catenin and Smad signaling and support the hypothesis that EMT is an important contributor to pathologic fibrosis. 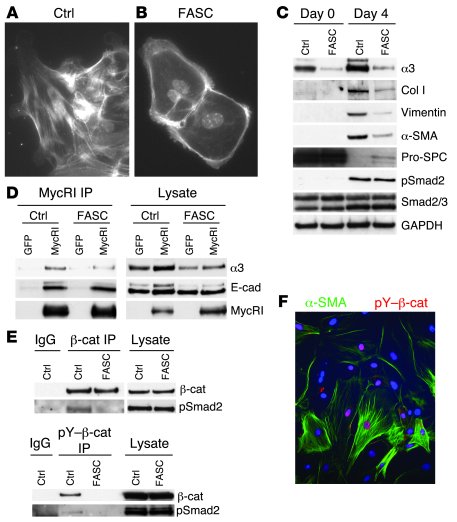 ( and ) Primary AECs from FASC () and littermate control () mice were cultured on Fn for 4 days, then stained for F-actin with phalloidin and counterstained with DAPI (original magnification, ×60). Control cells demonstrated actin stress fibers consistent with a mesenchymal morphology, while FASC AECs demonstrated cortical actin staining consistent with an epithelial morphology. () Primary AECs from FASC or littermate control mice lacking 1 of the 3 transgenes were analyzed by immunoblot immediately after isolation (day 0) and 4 days after culturing on Fn-coated surfaces (day 4). FASC AECs had a blunted expression of mesenchymal markers collagen I, α-SMA, and vimentin. () Primary AECs were infected with lentivirus expressing mycRI or GFP as a control. Immunoprecipita­tion of mycRI demonstrated coprecipitation of α3 integrin and E-cadherin. () Coimmunoprecipitation of β-catenin (β-cat) and pSmad2 was seen with AECs from α3+/+ (control) but not AECs from FASC mice plated on Fn for 4 days to allow activation of TGF-β1 (top blot). TGF-β1–dependent tyrosine phosphorylation of β-catenin at Y654 and pY654–β-catenin/pSmad2 coprecipitation was only seen with AECs from α3+/+ mice (bottom blot). () Primary AECs cultured on Fn for 4 days then stained for α-SMA and pY654–β-catenin showed nuclear accumulation of β-catenin (original magnification, ×40).