Insulin signaling can be modulated by several isoforms of PKC in peripheral tissues. Here, we assessed whether one specific isoform, PKC-θ, was expressed in critical CNS regions that regulate energy balance and whether it mediated the deleterious effects of diets high in fat, specifically palmitic acid, on hypothalamic insulin activity in rats and mice. Using a combination of in situ hybridization and immunohistochemistry, we found that PKC-θ was expressed in discrete neuronal populations of the arcuate nucleus, specifically the neuropeptide Y/agouti-related protein neurons and the dorsal medial nucleus in the hypothalamus. CNS exposure to palmitic acid via direct infusion or by oral gavage increased the localization of PKC-θ to cell membranes in the hypothalamus, which was associated with impaired hypothalamic insulin and leptin signaling. This finding was specific for palmitic acid, as the monounsaturated fatty acid, oleic acid, neither increased membrane localization of PKC-θ nor induced insulin resistance. Finally, arcuate-specific knockdown of PKC-θ attenuated diet-induced obesity and improved insulin signaling. These results suggest that many of the deleterious effects of high-fat diets, specifically those enriched with palmitic acid, are CNS mediated via PKC-θ activation, resulting in reduced insulin activity.

PKC-θ is expressed in the hypothalamus. 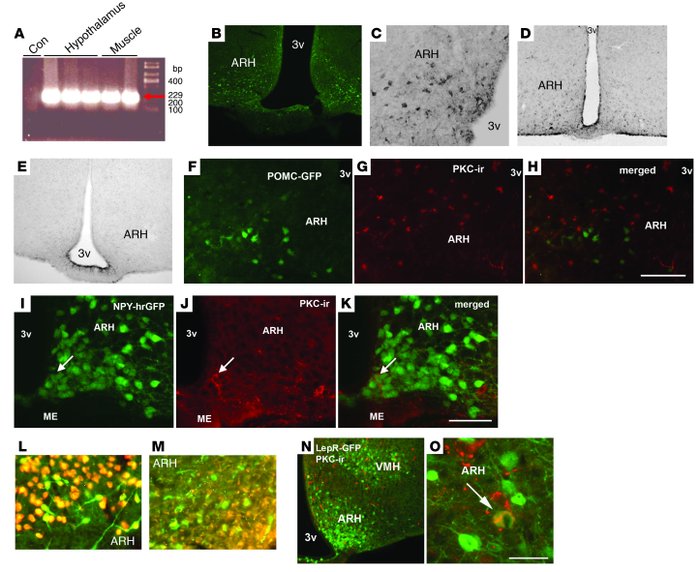 () PKC-θ expression, using RT-PCR in the hypothalamus and muscle of rats (con, water control). To determine regions within in the hypothalamus that express PKC-θ, we assessed PKC-θ–like immunoreactivity in cells by DAB and fluorescent immunocytochemistry. ( and ) Hypothalamic PKC-θ–like immunoreactivity in the arcuate assessed by fluorescent and DAB immunocytochemistry, respectively. ( and ) The specificity of the PKC-θ antibody is confirmed by comparing PKC-θ labeling in the hypothalamus of WT mice and PKC-θ–knockout mice () respectively. We used 2 different transgenic mouse lines that express GFP either in NPY or POMC neurons. In the arcuate, we did not observe colocalization of PKC-θ with POMC neurons, () in POMC neurons (green), () with PKC-θ (red), or () PKC-θ/POMC colocalization. We did observe 20% colocalization of () NPY neurons (green) (arrow identifies an NPY neuron), () with PKC-θ (red) (arrow identifies a PKC neuron), and () NPY/PKC-θ colocalization (arrow identifies a colocalized NPY/PKC neuron). The mice express humanized renilla GFP (hrGFP) on the NPY promoter. To determine whether PKC-θ is expressed in neurons or on glia, () we colocalized PKC-θ (green) with NeuN (red) but not with () GFAP (red), a glial-cell marker. To assess whether PKC-θ is expressed in neurons that respond to leptin, we used a transgenic line that expresses GFP in only cells that also express the leptin receptor (LepR-GFP). We identified 22% colocalization of cells in the arcuate nucleus that were positive for () leptin receptor (green) or () both leptin receptor and PKC-θ (yellow) (arrow identifies a PKC/LepR-GFP colocalized neuron). Original magnification, ×10 (, , and ); ×20 ( and ; ×40 ( and ); ×120 (). Scale bar: 120 μm (–); 100 μm (–); 300 μm (); 50 μm (). ARH, arcuate; ME, median eminence; PKC-ir, PKC immunoreactivity; 3v, third ventricle; VMH, ventral medial hypothalamic nucleus.