Early responses of Tregs and effector T cells (Teffs) to their first encounter with tumor cells have been poorly characterized. Here we have shown, in both implanted and in situ–induced mouse tumor models, that the appearance of tumor cells is immediately sensed by CD44hi memory Tregs that are specific for self antigens. The rapid response of these Tregs preceded and prevented activation of naive antitumor Teffs. The relative speed of the Treg versus the Teff response within the first 2–4 days determined the outcome of the antitumor immune response: tolerance or rejection. If antitumor memory Teffs were present at the time of tumor emergence, both Tregs and Teffs were recruited and activated with memory kinetics; however, the Tregs were unable to control the Teffs, which eradicated the tumor cells. This balance between effector and regulatory responses did not depend on the number of Tregs and Teffs, but rather on their memory status. Thus, in the natural setting, dominant tolerogenic immunosurveillance by self-specific memory Tregs protects tumors, just as it protects normal tissues. More generally, our results reveal that the timing of Treg and Teff engagement, determined by their memory status, is an important mode of regulation of immune responses.

The presence of memory Teffs at tumor emergence shifts the Treg/Teff balance toward efficient effector responses. 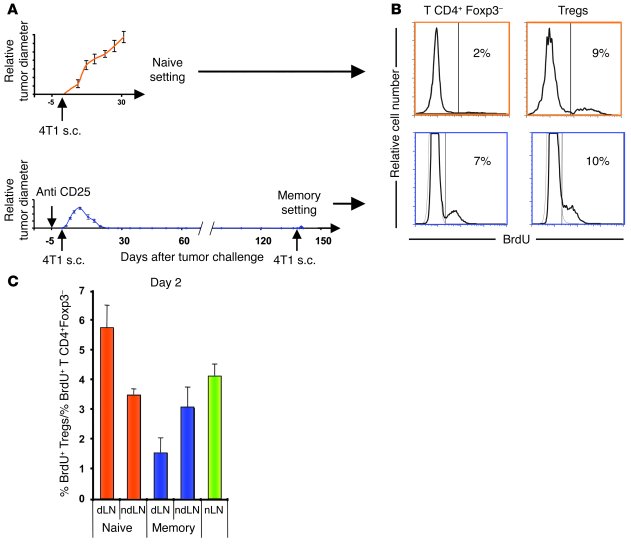 Tumor growth and T cell proliferation were evaluated in the naive setting in control mice and in the memory setting in mice cured from a first tumor challenge after Treg transitory depletion. () 4T1 tumor growth. () Flow cytometry profiles of BrdU incorporation (percent indicated within histograms) in CD4+Foxp3– T cell and Treg populations of dLNs analyzed 2 days after tumor challenge. Gray histograms represent the background staining with isotype-matched irrelevant mAbs. () Percent ratios of BrdU+ Tregs to BrdU+CD4+Foxp3– T cells in dLNs, ndLNs, and nLNs ( = 3–5 per group). First- and second-challenge dLN ratios are significantly different from each other, and each dLN ratio is significantly different from ndLN and nLN ratios ( < 0.05).