Although endothelial dysfunction, defined as abnormal vasoreactivity, is a common early finding in individuals with type 2 diabetes, the endothelium has not been known to regulate metabolism. As PPARγ, a transcriptional regulator of energy balance, is expressed in endothelial cells, we set out to investigate the role of endothelial cell PPARγ in metabolism using mice that lack PPARγ in the endothelium and BM (γEC/BM-KO). When γEC/BM-KO mice were fed a high-fat diet, they had decreased adiposity and increased insulin sensitivity compared with control mice, despite increased serum FFA and triglyceride (TG) levels. After fasting or olive oil gavage, γEC/BM-KO mice exhibited significant dyslipidemia and failed to respond to the FFA and TG lowering effects of the PPARγ agonist rosiglitazone. BM transplantation studies, which reconstituted hematopoietic PPARγ, established that these metabolic phenotypes were due to endothelial PPARγ deficiency. We further found that the impairment in TG-rich lipoprotein metabolism in γEC/BM-KO mice was associated with fatty acid–mediated lipoprotein lipase inhibition and changes in a PPARγ-regulated endothelial cell transcriptional program. Despite their metabolic improvements, high-fat diet–fed γEC/BM-KO mice had impaired vasoreactivity. Taken together, these data suggest that PPARγ in the endothelium integrates metabolic and vascular responses and may contribute to the effects of PPARγ agonists, thus expanding what endothelial function and dysfunction may entail. 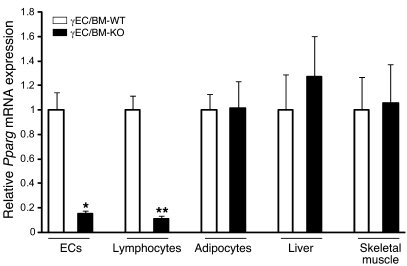