Protein interacting with C kinase 1 (PICK1) is a peripheral membrane protein involved in protein trafficking, a function that has been well characterized in neurons. Here, we report that male mice deficient in PICK1 are infertile and have a phenotype resembling the human disease globozoospermia. The primary defect in the testes of Pick1-knockout mice was fragmentation of acrosomes in the early stages of spermiogenesis. This fragmentation was followed by defects in nuclear elongation and mitochondrial sheath formation, leading to round-headed sperm, reduced sperm count, and severely impaired sperm motility. We found that PICK1 interacted with Golgi-associated PDZ- and coiled-coil motif–containing protein (GOPC) and the primary catalytic subunit of protein kinase 2 (CK2α′), proteins whose deficiencies lead to globozoospermia in mice. PICK1 was highly expressed in round spermatids and localized to Golgi-derived proacrosomal granules. GOPC colocalized with PICK1 in the Golgi region and facilitated formation of PICK1-positive clusters. Furthermore, there was an increase in apoptosis in the seminiferous tubules of Pick1–/– mice, a phenotype also seen in CK2α′-deficient mice. Our results suggest that PICK1 is involved in vesicle trafficking from the Golgi apparatus to the acrosome and cooperates with other proteins such as GOPC and CK2α′ in acrosome biogenesis. 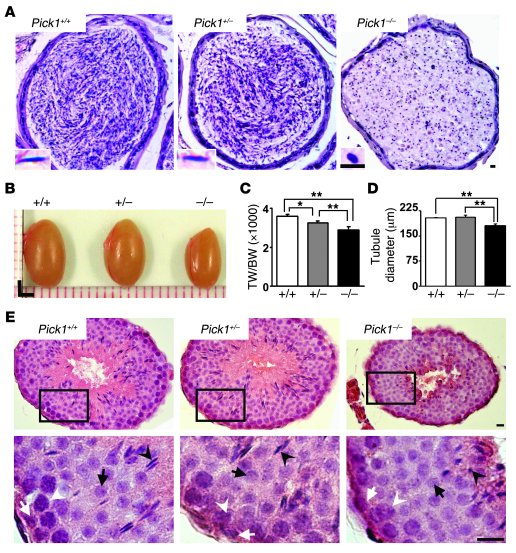