The activation of type I IFN signaling is a major component of host defense against viral infection, but it is not typically associated with immune responses to extracellular bacterial pathogens. Using mouse and human airway epithelial cells, we have demonstrated that Staphylococcus aureus activates type I IFN signaling, which contributes to its virulence as a respiratory pathogen. This response was dependent on the expression of protein A and, more specifically, the Xr domain, a short sequence–repeat region encoded by DNA that consists of repeated 24-bp sequences that are the basis of an internationally used epidemiological typing scheme. Protein A was endocytosed by airway epithelial cells and subsequently induced IFN-β expression, JAK-STAT signaling, and IL-6 production. Mice lacking IFN-α/β receptor 1 (IFNAR-deficient mice), which are incapable of responding to type I IFNs, were substantially protected against lethal S. aureus pneumonia compared with wild-type control mice. The profound immunological consequences of IFN-β signaling, particularly in the lung, may help to explain the conservation of multiple copies of the Xr domain of protein A in S. aureus strains and the importance of protein A as a virulence factor in the pathogenesis of staphylococcal pneumonia.

strain USA300 induces type I IFN signaling in airway epithelial cells that is dependent on the expression of protein A. 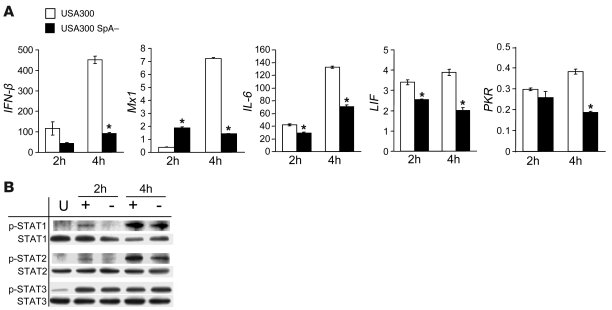 () Primary mouse airway epithelial cells were incubated with USA300 or a SpA deletion mutant, and induction of β, , , , and was detected by real-time PCR. Data are represented as fold increases over unstimulated controls and are representative of 3 independent experiments. * < 0.05 as compared with the -null strain, Student’s test. Error bars represent standard deviations. () p-STAT1, p-STAT2, and p-STAT3 were detected by immunoblot in primary airway epithelial cell cultures treated with USA300 (+) or -null (–). Corresponding total STATs are shown for loading controls.