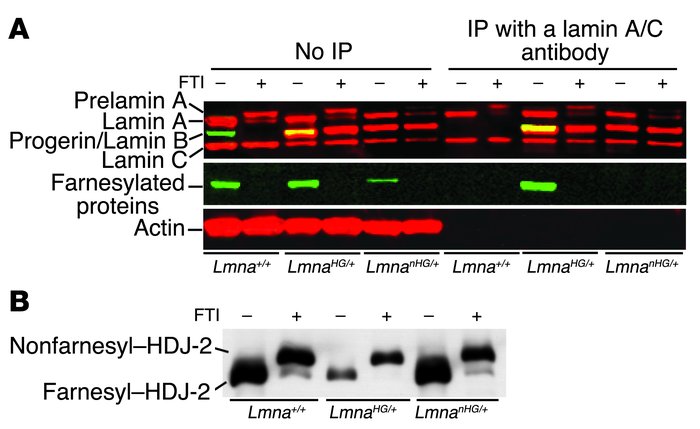 () Western blot of MEF extracts performed with an Odyssey Infrared Imaging System. The top panel shows the merged images of Western blots with an antibody specific for lamin A/C (red) and an antibody specific for the farnesol analogue AG (green); the middle panel shows the signal for the antibody against AG; the bottom panel shows a loading control (actin). In this experiment, , , and MEFs were incubated with AG (30 μM) in the presence (+) or absence (–) of an FTI (ABT-100, 5 μM). The electrophoretic mobility of progerin, lamin B1, and lamin B2 are virtually identical, and all are farnesylated; hence, the antibody against AG detected a farnesylated protein in all cell lines. When progerin and lamin A/C were immunoprecipitated with an antibody against lamin A/C, the progerin in MEFs — but not MEFs — stained with the antibody against AG. As expected, an FTI blocked the incorporation of AG into the lamin proteins. () Western blots of , , and MEFs with an HDJ-2–specific monoclonal antibody. Most of the HDJ-2 in FTI-treated MEFs migrated more slowly, a characteristic of nonfarnesylated HDJ-2.