The trapping of lipid-laden macrophages in the arterial intima is a critical but reversible step in atherogenesis. However, the mechanism by which this occurs is not clearly defined. Here, we tested in mice the hypothesis that CD36, a class B scavenger receptor expressed on macrophages, has a role in this process. Using both in vivo and in vitro migration assays, we found that oxidized LDL (oxLDL), but not native LDL, inhibited migration of WT mouse macrophages but not CD36-deficient cells. We further observed a crucial role for CD36 in modulating the in vitro migratory response of human peripheral blood monocyte–derived macrophages to oxLDL. oxLDL also induced rapid spreading and actin polymerization in CD36-sufficient but not CD36-deficient mouse macrophages in vitro. The underlying mechanism was dependent on oxLDL-mediated CD36 signaling, which resulted in sustained activation of focal adhesion kinase (FAK) and inactivation of Src homology 2–containing phosphotyrosine phosphatase (SHP-2). The latter was due to NADPH oxidase–mediated ROS generation, resulting in oxidative inactivation of critical cysteine residues in the SHP-2–active site. Macrophage migration in the presence of oxLDL was restored by both antioxidants and NADPH oxidase inhibitors, which restored the dynamic activation of FAK. We conclude therefore that CD36 signaling in response to oxLDL alters cytoskeletal dynamics to enhance macrophage spreading, inhibiting migration. This may induce trapping of macrophages in the arterial intima and promote atherosclerosis.

Macrophage migration in vivo is inhibited by NO2LDL in a CD36-dependent manner. 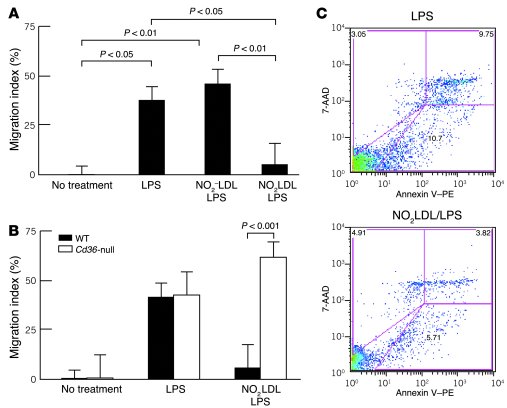 () Thioglycollate-elicited peritoneal macrophages were isolated by lavage and counted 4 hours after mice were injected intraperitoneally with LPS. In some cases, mice were pretreated with NO2LDL or control LDL (NO2–LDL; 50 μg) prior to LPS injection. Data are plotted as the migration index, defined as [1 – (peritoneal macrophage count from each animal/average number of peritoneal macrophages of the thioglycollate-only control group mice)] × 100 (%). = 10–15 per group; significance was determined by ANOVA and Bonferroni’s multiple comparison test. () Migration was evaluated as in , but in WT and -null mice. () Peritoneal macrophages from LPS- (upper panel) or LPS- and NO2LDL-injected (lower panel) WT mice were stained with annexin V and 7-amino-actinomycin D (7-AAD) and subjected to analysis by flow cytometry.