Plasmacytoid DCs (pDCs) have been implicated as crucial cells in antiviral immune responses. On recognizing HIV, they become activated, secreting large amounts of IFN-α and inflammatory cytokines, thereby potentiating innate and adaptive antiviral immune responses. Here, we have shown that HIV-stimulated human pDCs can also induce the differentiation of naive CD4+ T cells into Tregs with suppressive function. This differentiation was independent of pDC production of IFN-α and primarily dependent on pDC expression of indoleamine 2,3-dioxygenase, which was induced through the TLR/MyD88 pathway, following binding of HIV to CD4 and triggering of TLR7 by HIV genomic RNA. Functionally, the Tregs induced by pDCs were shown to inhibit the maturation of bystander conventional DCs. This study therefore reveals what we believe to be a novel mechanism by which pDC may regulate and potentially limit anti-HIV immune responses. 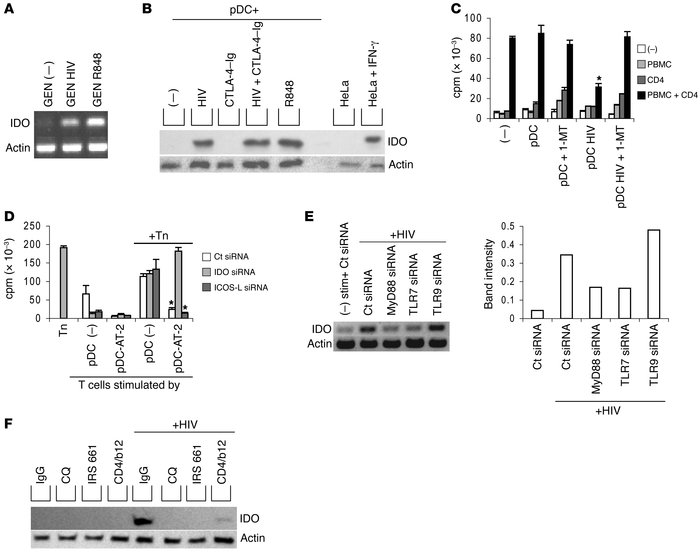 () RT-PCR for IDO of GEN cells stimulated for 18 hours by HIV or resiquimod (R848). () Western blot for IDO of purified primary pDCs stimulated with HIV or resiquimod, in combination with CTLA-4–Ig. HeLa cells treated by IFN-γ were used as a control. () Naive CD4+ T cells were stimulated by HIV-activated or unactivated pDCs as in Figure A, in the presence or absence of 1-methyl-tryptophan (1-MT), and then added to a primary MLR. Proliferation was measured at day 5 by thymidine incorporation. * < 0.01, Student’s test, compared with proliferation of naive T cells. Results are representative of at least 5 experiments. () GEN cells were electroporated with siRNA for IDO, ICOS-L, or control siRNA (Ct siRNA). After 1 day, they were stimulated by AT-2 HIV or left unstimulated and used as stimulating APCs for naive CD4+ T cells. After 7 days, the T cell suppressive activity was measured as in Figure B by adding the Tregs to naive CD4+ T cells (+Tn, 1:3 ratio). * < 0.01, Student t test, compared with proliferation of naive T cells alone. () GEN cells were electroporated with siRNA for MyD88, TLR7, or TLR9 or control siRNA for 1 day, before stimulation with HIV. IDO transcripts were detected by RT-PCR after 6 hours. Right: Densitometric quantification of the IDO PCR product, normalized to the actin levels. () Purified primary pDCs were stimulated for 18 hours by HIV, with or without preincubation with chloroquine (CQ), IRS 661, neutralizing anti-CD4 and anti-gp120 antibodies (CD4/b12), or isotype control (IgG). IDO expression was monitored by Western blot analysis.