Genital coinfections increase an individual’s risk of becoming infected with HIV-1 by sexual contact. Several mechanisms have been proposed to explain this, such as the presence of ulceration and bleeding caused by the coinfecting pathogen. Here we demonstrate that Langerhans cells (LCs) are involved in the increased susceptibility to HIV-1 in the presence of genital coinfections. Although LCs are a target for HIV-1 infection in genital tissues, we found that immature LCs did not efficiently mediate HIV-1 transmission in an ex vivo human skin explant model. However, the inflammatory stimuli TNF-α and Pam3CysSerLys4 (Pam3CSK4), the ligand for the TLR1/TLR2 heterodimer, strongly increased HIV-1 transmission by LCs through distinct mechanisms. TNF-α enhanced transmission by increasing HIV-1 replication in LCs, whereas Pam3CSK4 acted by increasing LC capture of HIV-1 and subsequent trans-infection of T cells. Genital infections such as Candida albicans and Neisseria gonorrhea not only triggered TLRs but also induced TNF-α production in vaginal and skin explants. Thus, during coinfection, LCs could be directly activated by pathogenic structures and indirectly activated by inflammatory factors, thereby increasing the risk of acquiring HIV-1. Our data demonstrate a decisive role for LCs in HIV-1 transmission during genital coinfections and suggest antiinflammatory therapies as potential strategies to prevent HIV-1 transmission.

An ex vivo skin model to investigate the effect of inflammation on HIV-1 transmission is shown. 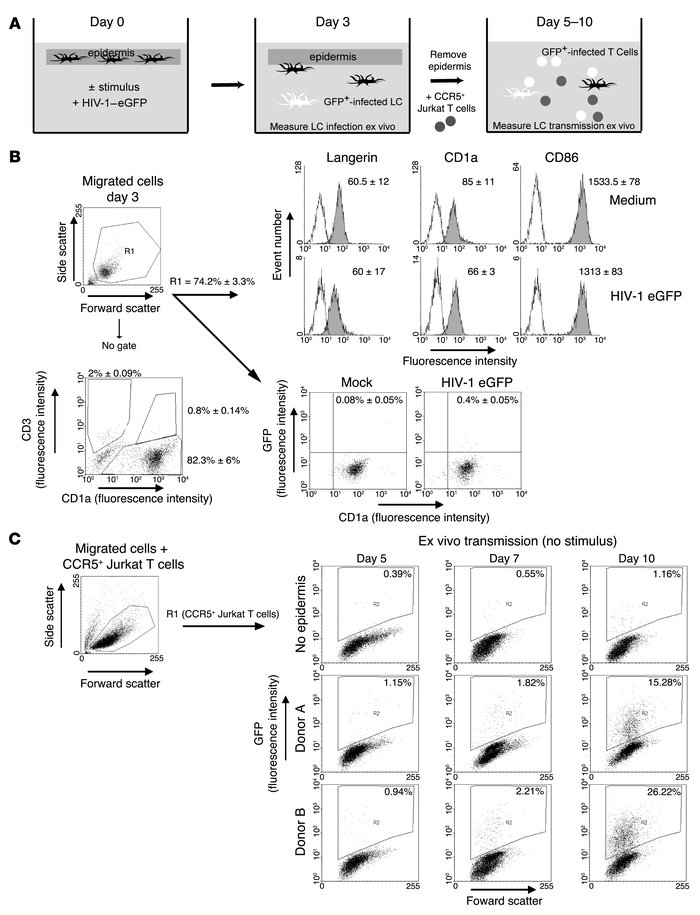 (–) Epidermal sheets were floated on medium in a 24-well plate and where indicated stimulated with different stimuli. After 6 hours the sheets were inoculated with HIV-1–eGFP. After 3 days, the epidermal sheets were removed and CCR5+ Jurkat T cells were added for an additional 7 days. Filled dendritic forms indicate LCs; open dendritic forms indicate GFP+-infected LCs; filled circles indicate CCR5+ Jurkat T cells; open circles indicate GFP+-infected T cells. () The migrated epidermal cells (day 3) were stained with antibodies against CD1a, Langerin, CD86, and CD3 and analyzed by flow cytometry to determine their phenotype and HIV-1 infection. Gates are based on isotype control (Supplemental Figure 1). R1 is gated on the larger cells in the population. Open histograms represent isotype-control; filled histogram specific antibody staining; the mean ± SD of the specific staining is depicted in the upper-right corner. The percentage of GFP+, CD3+, and CD1a+ cells ± SD is depicted in the upper-right corner of the dot plots. () Samples of the cocultures (day 5, 7, and 10) that were not stimulated with any stimulus were analyzed for GFP expression by flow cytometry. The percentage of GFP+ cells ± SD is depicted in the upper-right corner. As control for HIV-1 infection, the same concentration of HIV-1–eGFP was added to wells without epidermal sheets and processed similarly as the other conditions.