Confronting the scientific obstacles to global control of tuberculosis

Confronting the scientific obstacles to global control of tuberculosis

Tuberculosis (TB) is a major threat to global health, recently exacerbated by the emergence of highly drug-resistant forms of the disease-causing pathogen and synergy with HIV/AIDS. In 2006, the Stop TB Partnership published “The global plan to stop TB: 2006–2015,” which set out a vision of halving the prevalence of and mortality caused by the disease by 2015, followed by eliminating the disease as a public health problem by 2050. This vision depends on the development of improved diagnostics, simpler treatment, and more effective vaccination. Recently, active translational research pipelines directed toward each of these goals have been established, but improved understanding of the fundamental biology of this complex disease will prove to be the key to radical advances in TB control. 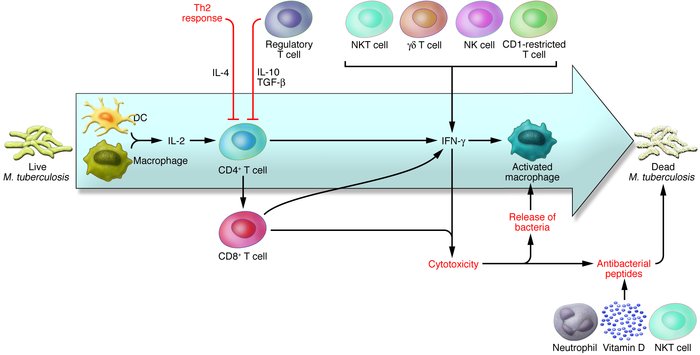 Evidence from experimental models, from rare human genetic conditions, and from HIV-associated TB demonstrate that the Th1-mediated IL-12–IFN-γ axis is essential for prevention of progressive disease. Priming this response provides the major focus for the vaccine candidates currently being assessed in clinical trials. A broader view of the immune response suggests multiple alternative strategies that may influence the outcome of infection, including delivery of IFN-γ by alternative lymphocyte subsets, release of bacteria by cytolysis of poorly microbicidal cells, and activation of IFN-γ–independent pathways of mycobacterial killing. It is probable that all of these activities are subject to regulatory control mechanisms in vivo, and successful vaccination may ultimately depend on establishing or resetting multicellular immune networks rather than overactivation of a single pathway.