Identification in rats of a programming window for reproductive tract masculinization, disruption of which leads to hypospadias and cryptorchidism

Identification in rats of a programming window for reproductive tract masculinization, disruption of which leads to hypospadias and cryptorchidism

Characterization of windows of androgen action in phallus development during fetal life. 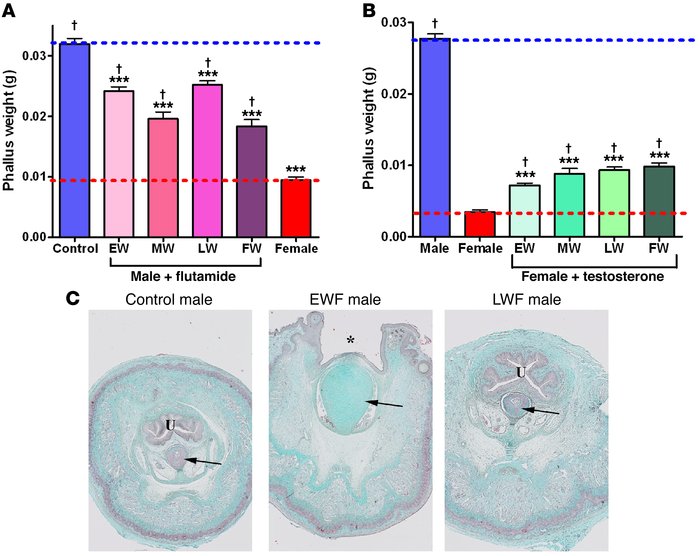 Reproductive tracts were examined at P25 from male rats exposed to flutamide () or at P17 from female rats exposed to testosterone () in utero during EW (E15.5–E17.5), MW (E17.5–E19.5), LW (E19.5–E21.5), or FW (E15.5–E21.5), compared with control male and female rats. () Phallus weight was reduced in male rats by exposure to flutamide during any window between E15.5 and E21.5, compared with that in control males. () Testosterone exposure during any window between E15.5 and E21.5 increased phallus weight in female rats, compared with that in control females, but not with male weight. () Images of P25 male penis histology showing that EW, but not LW, flutamide affected ossification of the os penis (arrow), indicated by the absence of osteoid cells (stained red by Goldner stain) in the os penis after exposure to EW flutamide. Note also the failure of the urethral folds to fuse in the EW flutamide penis (*), compared with the formation of a patent urethra in the control and LW flutamide male. Original magnification, ×20. Values are mean ± SEM ( = 5–28 rats from 2–5 litters per treatment group). *** < 0.001 compared with control male values; † < 0.001 compared with control female values. Blue dotted line highlights mean male level; red dotted line highlights mean female level.