Permanent neonatal diabetes mellitus (PNDM) is a rare disorder usually presenting within 6 months of birth. Although several genes have been linked to this disorder, in almost half the cases documented in Italy, the genetic cause remains unknown. Because the Akita mouse bearing a mutation in the Ins2 gene exhibits PNDM associated with pancreatic β cell apoptosis, we sequenced the human insulin gene in PNDM subjects with unidentified mutations. We discovered 7 heterozygous mutations in 10 unrelated probands. In 8 of these patients, insulin secretion was detectable at diabetes onset, but rapidly declined over time. When these mutant proinsulins were expressed in HEK293 cells, we observed defects in insulin protein folding and secretion. In these experiments, expression of the mutant proinsulins was also associated with increased Grp78 protein expression and XBP1 mRNA splicing, 2 markers of endoplasmic reticulum stress, and with increased apoptosis. Similarly transfected INS-1E insulinoma cells had diminished viability compared with those expressing WT proinsulin. In conclusion, we find that mutations in the insulin gene that promote proinsulin misfolding may cause PNDM. 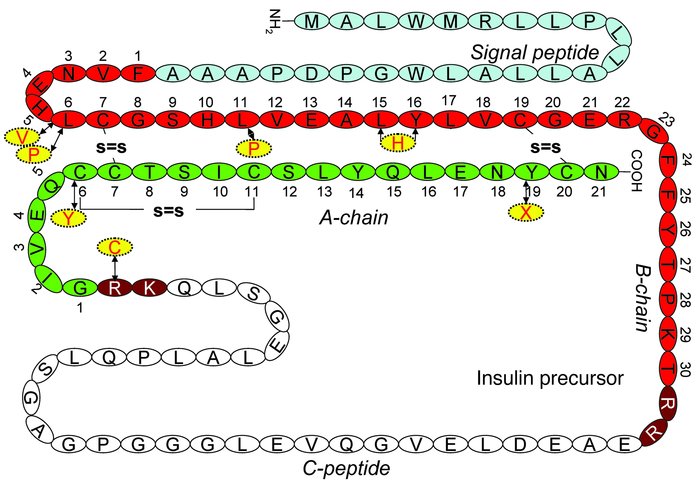 The amino acid sequence and disulfide bonds (s=s) of WT proinsulin are shown. Amino acid substitutions associated with PNDM/MDI are shown in yellow.