The microRNA (miRNA) processing enzyme Dicer1 is required for zygotic and embryonic development, but the early embryonic lethality of Dicer1 null alleles in mice has limited our ability to address the role of Dicer1 in normal mouse growth and development. To address this question, we used a mouse mutant with a hypomorphic Dicer1 allele (Dicerd/d) and found that Dicer1 deficiency resulted in female infertility. This defect in female Dicerd/d mice was caused by corpus luteum (CL) insufficiency and resulted, at least in part, from the impaired growth of new capillary vessels in the ovary. We found that the impaired CL angiogenesis in Dicerd/d mice was associated with a lack of miR17-5p and let7b, 2 miRNAs that participate in angiogenesis by regulating the expression of the antiangiogenic factor tissue inhibitor of metalloproteinase 1. Furthermore, injection of miR17-5p and let7b into the ovaries of Dicerd/d mice partially normalized tissue inhibitor of metalloproteinase 1 expression and CL angiogenesis. Our data indicate that the development and function of the ovarian CL is a physiological process that appears to be regulated by miRNAs and requires Dicer1 function.

CL insufficiency is the cause of female mouse infertility. 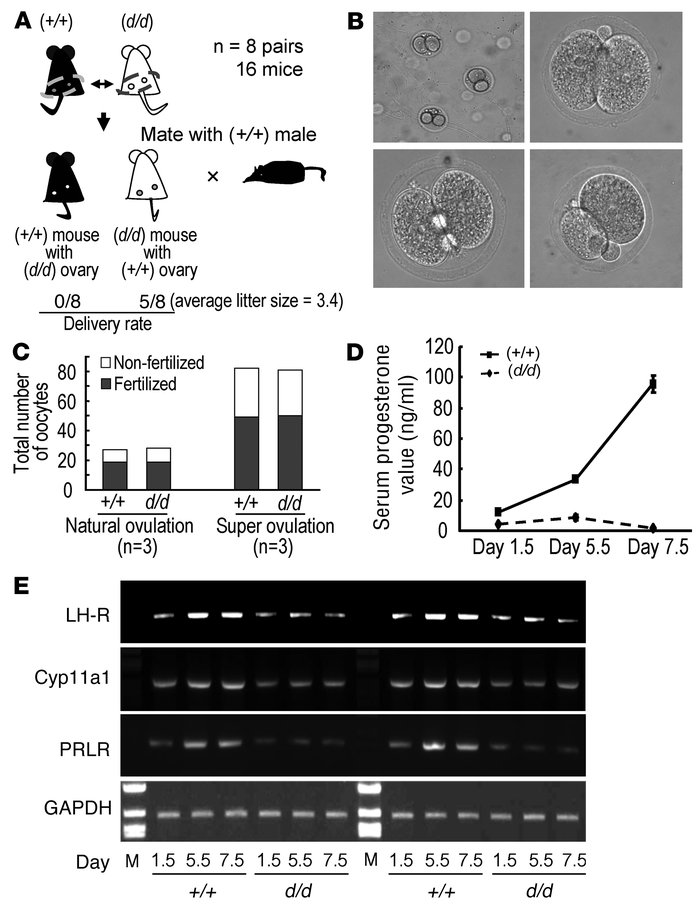 () Fertility of female mice transplanted with ovaries. Ovaries of and littermate mice were exchanged ( = 8 pairs), and the mice were subsequently bred to wild-type fertile males. Delivery rate and average litter size are shown. ( and ) Ovulation and fertilization were normal in mice. () Representative morphologies of the 2 cell embryos collected from the oviducts of mice on day 1.5 after coitus. Original magnification, ×100 (top), ×400 (bottom). () Rates of ovulation and fertilization in and mice were examined on day 1.5 with or without superovulation. () Serum progesterone levels were lower in mice during pregnancy. Serum levels of progesterone in mice were determined by ELISA on days 1.5, 5.5, and 7.5 of pregnancy and expressed as mean ± SD ( = 3). () The expression of genes associated with CL function was lower in mice. Semiquantitative RT-PCR analyses of luteinizing hormone receptor, prolactin receptor, and cytochrome P450 family 11 subfamily a polypeptide 1 mRNA in ovaries of and mice were conducted on days 1.5, 5.5, and 7.5 after coitus. Results from 2 separate littermate samples are shown.