Uncontrolled activation of the coagulation cascade contributes to the pathophysiology of several conditions, including acute and chronic lung diseases. Coagulation zymogens are considered to be largely derived from the circulation and locally activated in response to tissue injury and microvascular leak. Here we report that expression of coagulation factor X (FX) is locally increased in human and murine fibrotic lung tissue, with marked immunostaining associated with bronchial and alveolar epithelia. FXa was a potent inducer of the myofibroblast differentiation program in cultured primary human adult lung fibroblasts via TGF-β activation that was mediated by proteinase-activated receptor–1 (PAR1) and integrin αvβ5. PAR1, αvβ5, and α-SMA colocalized to fibrotic foci in lung biopsy specimens from individuals with idiopathic pulmonary fibrosis. Moreover, we demonstrated a causal link between FXa and fibrosis development by showing that a direct FXa inhibitor attenuated bleomycin-induced pulmonary fibrosis in mice. These data support what we believe to be a novel pathogenetic mechanism by which FXa, a central proteinase of the coagulation cascade, is locally expressed and drives the fibrotic response to lung injury. These findings herald a shift in our understanding of the origins of excessive procoagulant activity and place PAR1 central to the cross-talk between local procoagulant signaling and tissue remodeling. 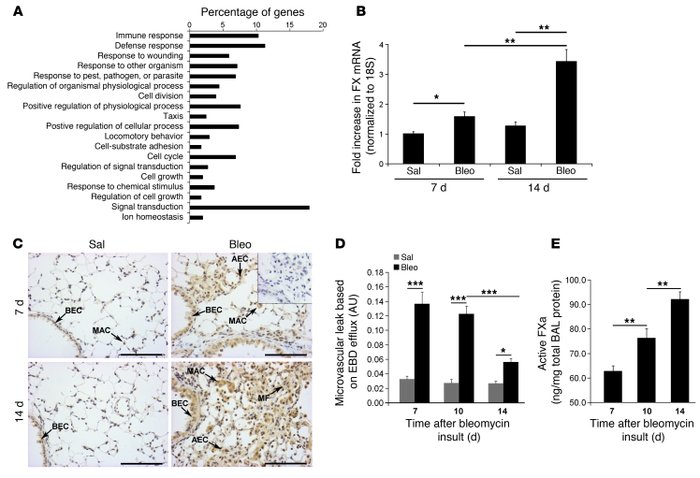