Experimental and clinical evidence indicate that bone marrow cells participate in the process of new blood vessel formation. However, the molecular mechanisms underlying their recruitment and their exact role are still elusive. Here, we show that bone marrow cells are recruited to the sites of neoangiogenesis through the neuropilin-1 (NP-1) receptor and that they are essential for the maturation of the activated endothelium and the formation of arteries in mice. By exploiting adeno-associated virus vector–mediated, long-term in vivo gene expression, we show that the 165-aa isoform of VEGF, which both activates the endothelium and recruits NP-1+ myeloid cells, is a powerful arteriogenic agent. In contrast, neither the shortest VEGF121 isoform, which does not bind NP-1 and thus does not recruit bone marrow cells, nor semaphorin 3A, which attracts cells but inhibits endothelial activation, are capable of sustaining arterial formation. Bone marrow myeloid cells are not arteriogenic per se nor are they directly incorporated in the newly formed vasculature, but they contribute to arterial formation through a paracrine effect ensuing in the activation and proliferation of tissue-resident smooth muscle cells.

Differential effects of VEGF165, VEGF121, and Sema3A on angiogenesis. 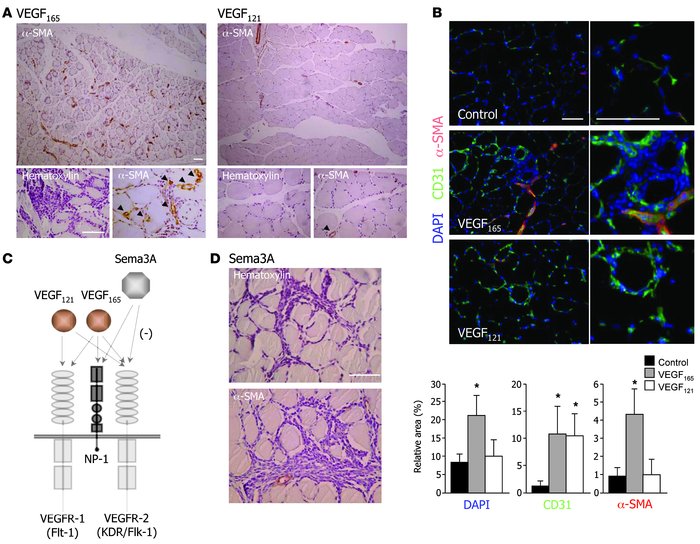 () α-SMA immunohistochemistry of muscle sections at 1 month after the injection of AAV-VEGF121 or AAV-VEGF165. While VEGF165 induced the appearance of a striking number of arterioles interspersed within a massive infiltration of mononuclear cells, VEGF121 was incapable of sustaining either effect. The lower panels show higher-magnification image to highlight the presence of cellular infiltration (hematoxylin staining on the left) and of arterial vessels (α-SMA staining on the right; arterioles indicated by black arrowheads), specifically in muscles expressing VEGF165. Scale bars: 100 μm. () Comparison between VEGF121- and VEGF165-induced angiogenesis. While both VEGF isoforms induce endothelial cell proliferation to a similar extent (CD31 staining in green), only VEGF165 expression results in a significant increase in the total number of cells (DAPI nuclear staining in blue) paralleled by the formation of new arteries (α-SMA staining in red). Histograms on the bottom show the quantification of the relative area occupied by cellular nuclei (DAPI), endothelial cells (CD31), or SMCs (α-SMA) in 20 independent sections for each treatment. Data are presented as means ± SD. *Statistical significance over control, AAV–LacZ-treated muscles ( < 0.05). Scale bars: 100 μm. () Schematic representation of the interactions between the 3 ligands (VEGF165, VEGF121, and Sema3A) and the 3 receptors (VEGFR-1/Flt-1, VEGFR-2/Flk-1, and NP-1) considered in this study. () Cellular infiltration induced by Sema3A in the absence of neoangiogenesis. The long-term overexpression of Sema3A induced the appearance of a mononuclear cell infiltration, very similar to the one observed in AAV-VEGF165–treated muscles (hematoxylin staining in the upper panel). However, no new arteries could be detected in these muscles, as shown here by α-SMA immunohistochemistry (lower panel). Scale bar: 100 μm.