Altered degradation of α-synuclein (α-syn) has been implicated in the pathogenesis of Parkinson disease (PD). We have shown that α-syn can be degraded via chaperone-mediated autophagy (CMA), a selective lysosomal mechanism for degradation of cytosolic proteins. Pathogenic mutants of α-syn block lysosomal translocation, impairing their own degradation along with that of other CMA substrates. While pathogenic α-syn mutations are rare, α-syn undergoes posttranslational modifications, which may underlie its accumulation in cytosolic aggregates in most forms of PD. Using mouse ventral medial neuron cultures, SH-SY5Y cells in culture, and isolated mouse lysosomes, we have found that most of these posttranslational modifications of α-syn impair degradation of this protein by CMA but do not affect degradation of other substrates. Dopamine-modified α-syn, however, is not only poorly degraded by CMA but also blocks degradation of other substrates by this pathway. As blockage of CMA increases cellular vulnerability to stressors, we propose that dopamine-induced autophagic inhibition could explain the selective degeneration of PD dopaminergic neurons. 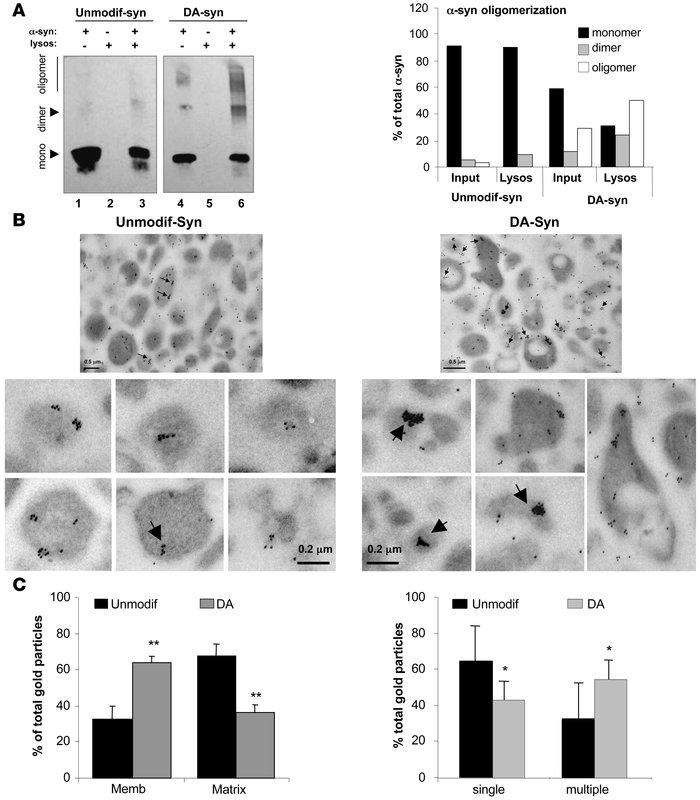 () Association of unmodified (Unmodif-syn) and dopamine-reacted α-syn (DA-syn) to isolated lysosomes was analyzed after incubation by SDS-PAGE and immunoblot for α-syn. Monomers (mono), dimers, and oligomers are indicated by arrows. Lanes 1 and 4: one-tenth of the protein added to the incubation (inputs); lanes 2 and 5: lysosomes incubated alone; lanes 3 and 6: lysosomes incubated with α-syn. Right panel: percentage of α-syn in each of the different multimeric states in the input and associated with lysosomes was calculated by densitometric analysis of the immunoblots. () Electron microscopy and immunogold with an antibody against α-syn of lysosomes incubated as in . The contribution of nonlysosomal structures to this fraction was less than 0.01%, and the percentage of total lysosomes active for CMA in this fraction was 95%. Arrows indicate clusters (>5) of gold particles. Panels on the bottom show individual lysosomes at higher magnification to better show the size of the gold particle clusters. () Percentage of gold particles associated with the lysosomal membrane and matrix (left panel) and present as single particles or organized in clusters (>5 gold particles) (right panel) in lysosomes incubated with unmodified and dopamine-reacted α-syn. Values are mean + SEM of the quantification of 4 fields (approximately 150 lysosomes). * < 0.05; ** < 0.01.