Local anesthetics (LAs) block the generation and propagation of action potentials by interacting with specific sites of voltage-gated Na+ channels. LAs can also excite sensory neurons and be neurotoxic through mechanisms that are as yet undefined. Nonspecific cation channels of the transient receptor potential (TRP) channel family that are predominantly expressed by nociceptive sensory neurons render these neurons sensitive to a variety of insults. Here we demonstrated that the LA lidocaine activated TRP channel family receptors TRPV1 and, to a lesser extent, TRPA1 in rodent dorsal root ganglion sensory neurons as well as in HEK293t cells expressing TRPV1 or TRPA1. Lidocaine also induced a TRPV1-dependent release of calcitonin gene–related peptide (CGRP) from isolated skin and peripheral nerve. Lidocaine sensitivity of TRPV1 required segments of the putative vanilloid-binding domain within and adjacent to transmembrane domain 3, was diminished under phosphatidylinositol 4,5-bisphosphate depletion, and was abrogated by a point mutation at residue R701 in the proximal C-terminal TRP domain. These data identify TRPV1 and TRPA1 as putative key elements of LA-induced nociceptor excitation. This effect is sufficient to release CGRP, a key component of neurogenic inflammation, and warrants investigation into the role of TRPV1 and TRPA1 in LA-induced neurotoxicity.

Lidocaine induces an increase of [Ca2+]i and inward currents in DRG neurons. 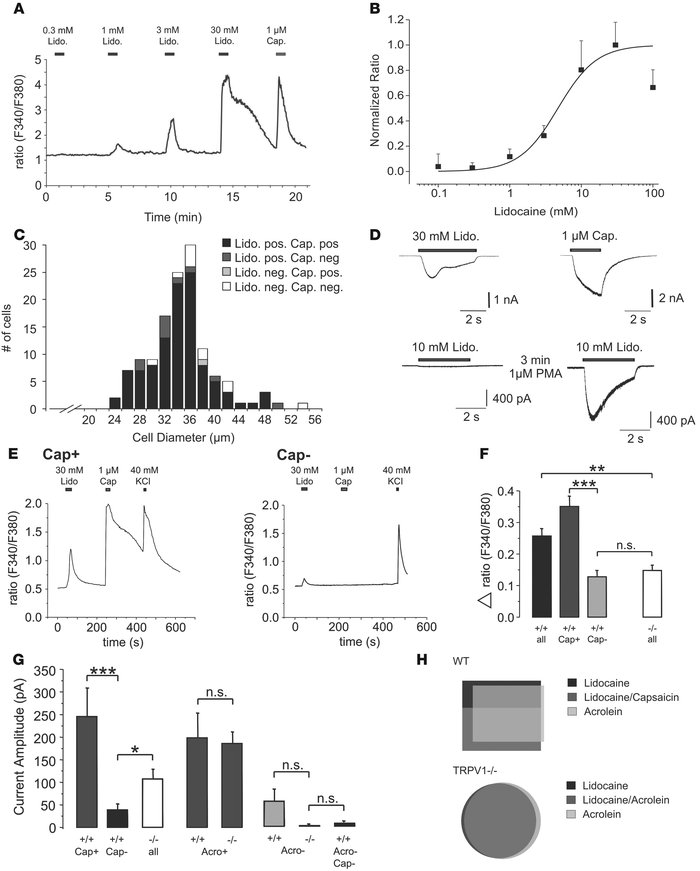 () Representative experiment showing increasing changes in fluorescence ratios F340/F380 with increasing concentrations of lidocaine in a capsaicin-sensitive rat DRG neuron. Cells were treated with increasing concentrations of lidocaine for 40 s in intervals of 4 min. After lidocaine treatment, cells were subsequently treated with 1 μM capsaicin. () Dose-response curve for lidocaine-evoked [Ca2+]i rise in rat DRG neurons. Due to an incomplete recovery of responses to 30 and 100 mM, 2 independent sets of experiments were used to compile the dose-response curve: 0.3, 1, 3, and 30 mM ( = 65) and 0.1, 3, 10, and 100 mM ( = 64). The data were fitted to the Hill equation. () Cell diameter of rat DRG neurons that were sensitive or insensitive to lidocaine and capsaicin. () Representative inward currents activated by lidocaine (30 mM) and capsaicin (1 μM) and the effect of PMA on lidocaine-evoked currents in rat DRG neurons. Cells were held at –60 mV, and test solutions were applied in intervals of 3 min. () Changes in fluorescence ratios F340/F380 in a capsaicin-sensitive and -insensitive mouse DRG neuron. Cells were treated with 30 mM lidocaine (30 s), 1 μM capsaicin (10 s), and 40 mM KCl (10 s) in intervals of 3 minutes. Only cells displaying a clear response to KCl were included in the analysis. () Mean changes in fluorescence ratios [Δratio (F340/F380)] induced by 30 mM lidocaine in mouse WT and DRG neurons (unpaired Student’s test). The designation “all” denotes all neurons of the respective genotype that were examined. WT neurons were divided into 2 categories, capsaicin sensitive (Cap+) and insensitive (Cap–). () Mean current amplitudes evoked by 30 mM lidocaine in mouse WT ( = 49) and ( = 35) neurons. WT neurons were divided into capsaicin-sensitive and -insensitive neurons. Both WT and neurons were divided into acrolein-sensitive (Acro+) and -insensitive (Acro–) neurons (unpaired Student’s test). Neurons that neither responded to lidocaine (30 mM), nor capsaicin (1 μM), nor acrolein (100 μM) (WT, 12 of 49; , 12 of 35) were included. () Area-proportional Venn diagram to represent the fraction of WT or neurons responding to 1, 2, or 3 of the substances lidocaine, capsaicin, and acrolein. Cells responding to none of the substances were excluded. * < 0.05; ** < 0.01; *** < 0.001.