In vitro studies indicate that binding of talin to the β3 integrin cytoplasmic domain (tail) results in integrin αIIbβ3 (GPIIb–IIIa) activation. Here we tested the importance of talin binding for integrin activation in vivo and its biological significance by generating mice harboring point mutations in the β3 tail. We introduced a β3(Y747A) substitution that disrupts the binding of talin, filamin, and other cytoplasmic proteins and a β3(L746A) substitution that selectively disrupts interactions only with talin. Platelets from animals homozygous for each mutation showed impaired agonist-induced fibrinogen binding and platelet aggregation, providing proof that inside-out signals that activate αIIbβ3 require binding of talin to the β3 tail. β3(L746A) mice were resistant to both pulmonary thromboembolism and to ferric chloride–induced thrombosis of the carotid artery. Pathological bleeding, measured by the presence of fecal blood and development of anemia, occurred in 53% of β3(Y747A) and virtually all β3-null animals examined. Remarkably, less than 5% of β3(L746A) animals exhibited this form of bleeding. These results establish that αIIbβ3 activation in vivo is dependent on the interaction of talin with the β3 integrin cytoplasmic domain. Furthermore, they suggest that modulation of β3 integrin–talin interactions may provide an attractive target for antithrombotics and result in a reduced risk of pathological bleeding. 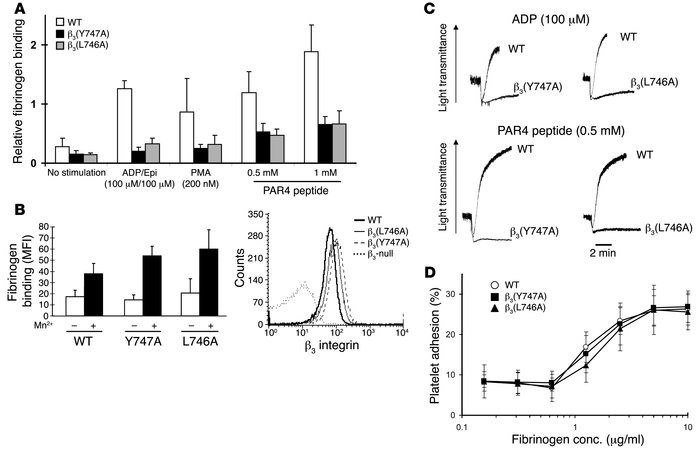 () FITC-labeled fibrinogen binding was measured by flow cytometry. Fibrinogen binding was reduced in β3 mutant platelets in response to platelet agonists. Specific binding was defined as that which was inhibitable by 2 mM EDTA. Mean fluorescence intensity (MFI) for each agonist treatment was normalized to the MFI obtained with 0.5 mM MnCl2 treatment. = 7, 6, and 4 for WT, β3(Y747A), and β3(L746A), respectively. Epi, epinephrine. () Platelets from both WT mice and β3 mutants showed increased fibrinogen binding in the presence of 0.5 mM MnCl2 (left). Surface β3 integrin expression of platelets obtained from β3 mutant animals (right). Results are representative of 4 independent experiments and at least 4 mice per genotype. () Aggregation of platelets obtained from WT or β3 mutant mice was measured in response to the addition of 100 μM ADP or 0.5 mM PAR4 peptide. Results are representative of at least 2 independent experiments on at least 3 animals from each genotype. () Platelet adhesion to immobilized fibrinogen. Washed platelets were incubated in fibrinogen-coated microtiter wells for 1 hour at room temperature. Results are shown as percentage of adherent cells relative to the total number added to each well. = 7, 5, and 4 for WT, β3(Y747A), and β3(L746A), respectively. Error bars represent SD.