Obesity is characterized by hyperinsulinemia, hyperleptinemia, and an increase in islet volume. While the mechanisms that hasten the onset of diabetes in obese individuals are not known, it is possible that the adipose-derived hormone leptin plays a role. In addition to its central actions, leptin exerts biological effects by acting in peripheral tissues including the endocrine pancreas. To explore the impact of disrupting leptin signaling in the pancreas on β cell growth and/or function, we created pancreas-specific leptin receptor (ObR) KOs using mice expressing Cre recombinase under the control of the pancreatic and duodenal homeobox 1 (Pdx1) promoter. The KOs exhibited improved glucose tolerance due to enhanced early-phase insulin secretion, and a greater β cell mass secondary to increased β cell size and enhanced expression and phosphorylation of p70S6K. Similar effects on p70S6K were observed in MIN6 β cells with knockdown of the ObR gene, suggesting crosstalk between leptin and insulin signaling pathways. Surprisingly, challenging the KOs with a high-fat diet led to attenuated acute insulin secretory response to glucose, poor compensatory islet growth, and glucose intolerance. Together, these data provide direct genetic evidence, from a unique mouse model lacking ObRs only in the pancreas, for a critical role for leptin signaling in islet biology and suggest that altered leptin action in islets is one factor that contributes to obesity-associated diabetes.

Schematic proposing a potential role for leptin signaling in islets in the development of obesity-associated diabetes. 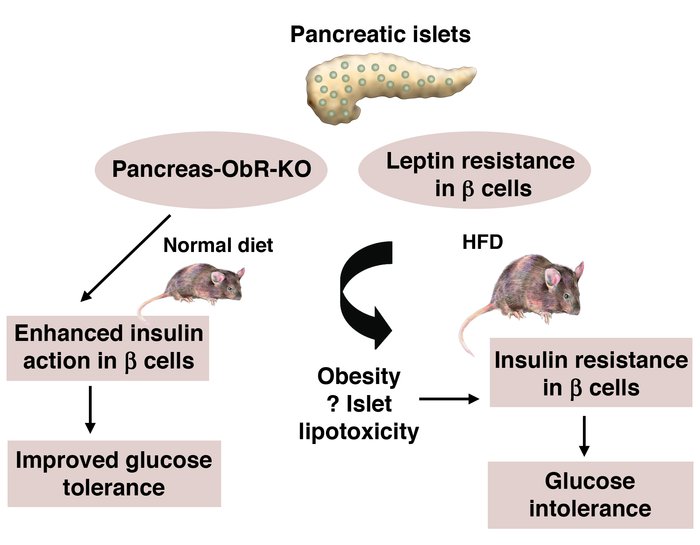