Enterohemorrhagic Escherichia coli (EHEC) O157:H7 causes hemorrhagic colitis and hemolytic uremic syndrome (HUS) by colonizing the gut mucosa and producing Shiga toxins (Stx). The only factor clearly demonstrated to play a role in EHEC adherence to intestinal epithelial cells is intimin, which binds host cell integrins and nucleolin, as well as a receptor (Tir) that it injects into the host cell. Here we report that EHEC O157:H7 produces adhesive type IV pili, which we term hemorrhagic coli pilus (HCP), composed of a 19-kDa pilin subunit (HcpA) that is encoded by the hcpA chromosomal gene. HCP were observed as bundles of fibers greater than 10 μm in length that formed physical bridges between bacteria adhering to human and bovine host cells. Sera of HUS patients, but not healthy individuals, recognized HcpA, suggesting that the pili are produced in vivo during EHEC infections. Inactivation of the hcpA gene in EHEC EDL933 resulted in significantly reduced adherence to cultured human intestinal and bovine renal epithelial cells and to porcine and bovine gut explants. An escN mutant, which is unable to translocate Tir, adhered less than the hcpA mutant, suggesting that adherence mediated by intimin-Tir interactions is a prelude to HCP-mediated adherence. An hcpA and stx1,2 triple mutant and an hcpA mutant had similar levels of adherence to bovine and human epithelial cells while a stx1,2 double mutant had only a minor defect in adherence, indicating that HCP-mediated adherence and cytotoxicity are independent events. Our data establish that EHEC O157:H7 HCP are intestinal colonization factors that are likely to contribute to the pathogenic potential of this food-borne pathogen.

Adherence of EHEC strains to pig and cow intestinal explants. 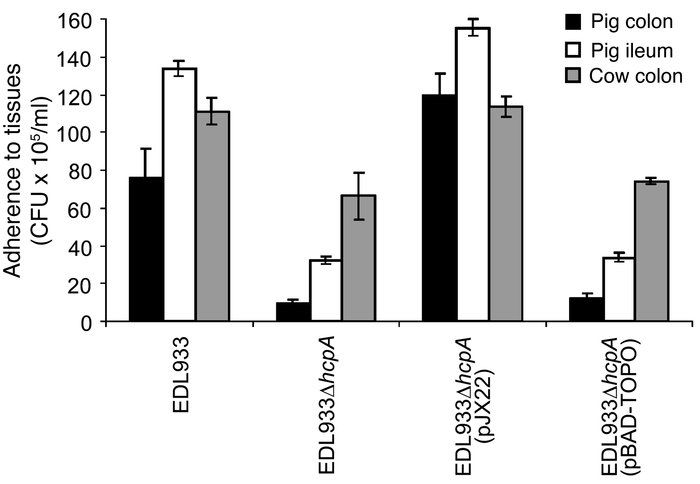 Pig (ileum and colon) and cow (colon) gut tissues were cut into squares of 8 × 8 mm and 0.8 g of weight, washed, and incubated for 6 hours in DMEM with cultures of EDL933, EDL933ΔEDL933Δ(pJX22), and EDL933Δ(pBAD-TOPO) obtained in Minca broth. Shown is the average of 3 experiments performed in triplicate. Note the reduction in adherence to animal intestinal sections of the mutant.