Depleting host immune elements with nonmyeloablative regimens prior to the adoptive transfer of tumor-specific CD8+ T cells significantly enhances tumor treatment. In the current study, superior antitumor efficacy was achieved by further increasing the intensity of lymphodepletion to a level that required HSC transplantation. Surprisingly, the HSC transplant and not the increased lymphodepletion caused a robust expansion of adoptively transferred tumor-specific CD8+ T cells. The HSC-driven cell expansion of effector, but not of naive, CD8+ T cells was independent of in vivo restimulation by MHC class I–expressing APCs. Simultaneously, HSCs also facilitated the reconstitution of the host lymphoid compartment, including inhibitory elements, not merely via the production of progeny cells but by enhancing the expansion of cells that had survived lymphodepletion. Profound lymphodepletion, by myeloablation or by genetic means, focused the nonspecific HSC boost preferentially toward the transferred tumor-specific T cells, leading to successful tumor treatment. These findings indicate that CD8+ T cell–mediated tumor responses can be efficiently driven by HSCs in the myeloablative setting and have substantial implications for the design of new antitumor immunotherapies.

The antitumor effectiveness of HSC-driven CD8+ T cell proliferation is dependent on the reduction of host inhibitory elements. 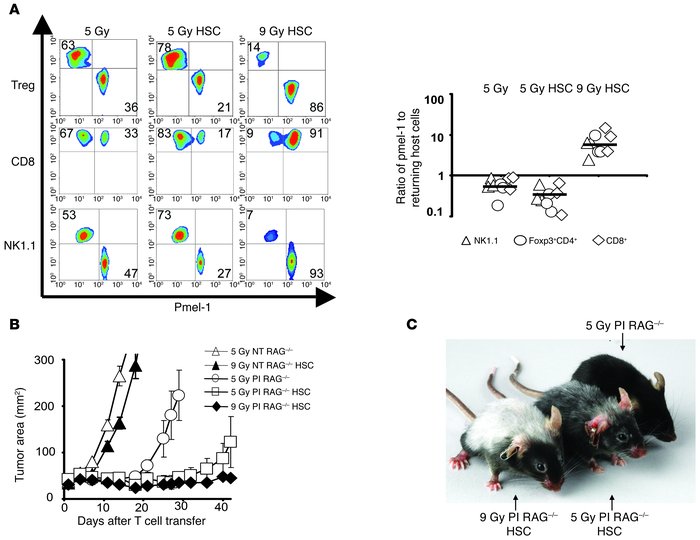