The role of the cystic fibrosis transmembrane conductance regulator (CFTR) as a cAMP-dependent chloride channel on the apical membrane of epithelia is well established. However, the processes by which CFTR is regulated on the cell surface are not clear. Here we report the identification of a protein-protein interaction between CFTR and the cytoskeletal filamin proteins. Using proteomic approaches, we identified filamins as proteins that associate with the extreme CFTR N terminus. Furthermore, we identified a disease-causing missense mutation in CFTR, serine 13 to phenylalanine (S13F), which disrupted this interaction. In cells, filamins tethered plasma membrane CFTR to the underlying actin network. This interaction stabilized CFTR at the cell surface and regulated the plasma membrane dynamics and confinement of the channel. In the absence of filamin binding, CFTR was internalized from the cell surface, where it prematurely accumulated in lysosomes and was ultimately degraded. Our data demonstrate what we believe to be a previously unrecognized role for the CFTR N terminus in the regulation of the plasma membrane stability and metabolic stability of CFTR. In addition, we elucidate the molecular defect associated with the S13F mutation.

FLN-A localizes to the subapical membrane of airway epithelia. 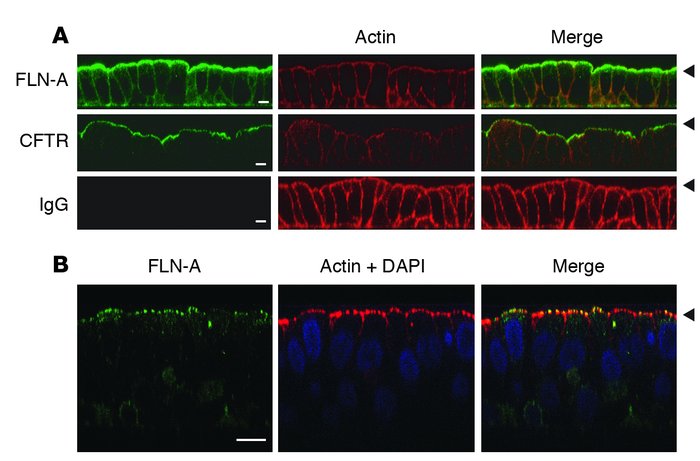 FLN-A localization was analyzed by immunofluorescence in () Calu-3 cells or () primary cultures of WD-HBEs as described in Methods. Arrowheads indicate the apical membrane. CFTR staining and purified, whole mouse IgG as a negative control are also shown in Calu-3 cells. Scale bars: 10 μm.