The cardiac outflow tract develops as a result of a complex interplay among several cell types, including cardiac neural crest cells, endothelial cells, and cardiomyocytes. In both humans and mice, mutations in components of the Notch signaling pathway result in congenital heart disease characterized by cardiac outflow tract defects. However, the specific cell types in which Notch functions during cardiovascular development remain to be defined. In addition, in vitro studies have provided conflicting data regarding the ability of Notch to promote or inhibit smooth muscle differentiation, while the physiological role for Notch in smooth muscle formation during development remains unclear. In this study, we generated mice in which Notch signaling was specifically inactivated in derivatives of the neural crest. These mice exhibited cardiovascular anomalies, including aortic arch patterning defects, pulmonary artery stenosis, and ventricular septal defects. We show that Notch plays a critical, cell-autonomous role in the differentiation of cardiac neural crest precursors into smooth muscle cells both in vitro and in vivo, and we identify specific Notch targets in neural crest that are implicated in this process. These results provide a molecular and cellular framework for understanding the role of Notch signaling in the etiology of congenital heart disease.

Multiple Notch receptors and ligands are expressed in the developing cardiac outflow tract. 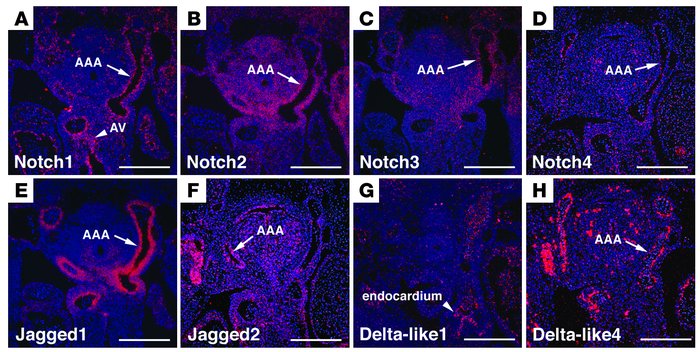