Idiopathic hypogonadotropic hypogonadism (IHH) due to defects of gonadotropin-releasing hormone (GnRH) secretion and/or action is a developmental disorder of sexual maturation. To date, several single-gene defects have been implicated in the pathogenesis of IHH. However, significant inter- and intrafamilial variability and apparent incomplete penetrance in familial cases of IHH are difficult to reconcile with the model of a single-gene defect. We therefore hypothesized that mutations at different IHH loci interact in some families to modify their phenotypes. To address this issue, we studied 2 families, one with Kallmann syndrome (IHH and anosmia) and another with normosmic IHH, in which a single-gene defect had been identified: a heterozygous FGF receptor 1 (FGFR1) mutation in pedigree 1 and a compound heterozygous gonadotropin-releasing hormone receptor (GNRHR) mutation in pedigree 2, both of which varied markedly in expressivity within and across families. Further candidate gene screening revealed a second heterozygous deletion in the nasal embryonic LHRH factor (NELF) gene in pedigree 1 and an additional heterozygous FGFR1 mutation in pedigree 2 that accounted for the considerable phenotypic variability. Therefore, 2 different gene defects can synergize to produce a more severe phenotype in IHH families than either alone. This genetic model could account for some phenotypic heterogeneity seen in GnRH deficiency. 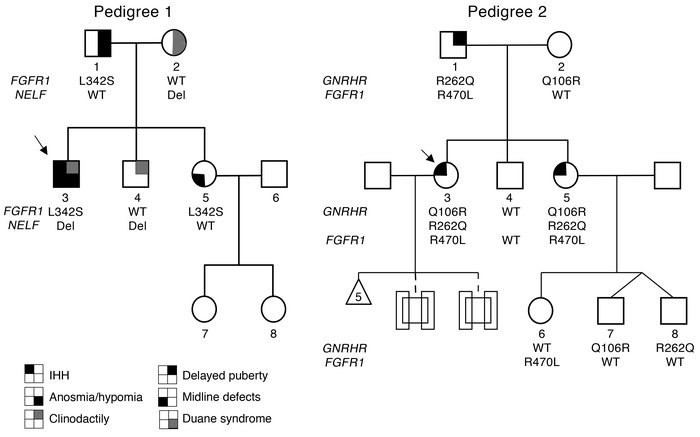