NO transfer reactions between protein and peptide cysteines have been proposed to represent regulated signaling processes. We used the pharmaceutical antioxidant N-acetylcysteine (NAC) as a bait reactant to measure NO transfer reactions in blood and to study the vascular effects of these reactions in vivo. NAC was converted to S-nitroso-N-acetylcysteine (SNOAC), decreasing erythrocytic S-nitrosothiol content, both during whole-blood deoxygenation ex vivo and during a 3-week protocol in which mice received high-dose NAC in vivo. Strikingly, the NAC-treated mice developed pulmonary arterial hypertension (PAH) that mimicked the effects of chronic hypoxia. Moreover, systemic SNOAC administration recapitulated effects of both NAC and hypoxia. eNOS-deficient mice were protected from the effects of NAC but not SNOAC, suggesting that conversion of NAC to SNOAC was necessary for the development of PAH. These data reveal an unanticipated adverse effect of chronic NAC administration and introduce a new animal model of PAH. Moreover, evidence that conversion of NAC to SNOAC during blood deoxygenation is necessary for the development of PAH in this model challenges conventional views of oxygen sensing and of NO signaling.

Three weeks of NAC treatment or hypoxia increases the whole-lung expression of certain genes associated with the development of PAH in mice. 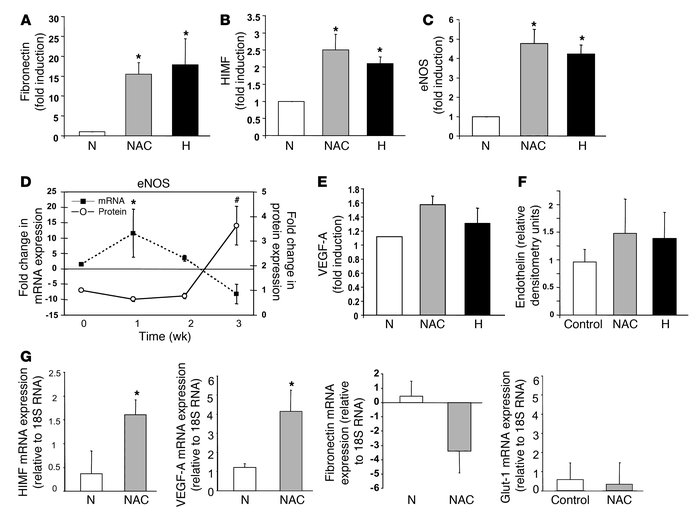 The expression of fibronectin (), HIMF (), eNOS ( and ), VEGF-A (), and endothelin () in whole-lung homogenates from NAC-treated mice was examined by immunoblot. Fold increase in density relative to MAPK (equal loading control) was determined for each condition. The increases in fibronectin, HIMF, and eNOS ( = 3–5 each) were significant. () Three weeks of NAC treatment also increased whole-lung mRNA, assayed relative to 18S RNA by RT-PCR, for and but not or ( = 3 each). Time course analysis of NAC-treated mice () revealed that the increase in whole-lung mRNA (filled squares, left axis) preceded the increase in eNOS protein expression (open circles, right axis) but decreased by 3 weeks. * < 0.05; # < 0.01.