β-Glucosidase 2 (GBA2) is a resident enzyme of the endoplasmic reticulum thought to play a role in the metabolism of bile acid–glucose conjugates. To gain insight into the biological function of this enzyme and its substrates, we generated mice deficient in GBA2 and found that these animals had normal bile acid metabolism. Knockout males exhibited impaired fertility. Microscopic examination of sperm revealed large round heads (globozoospermia), abnormal acrosomes, and defective mobility. Glycolipids, identified as glucosylceramides by mass spectrometry, accumulated in the testes, brains, and livers of the knockout mice but did not cause obvious neurological symptoms, organomegaly, or a reduction in lifespan. Recombinant GBA2 hydrolyzed glucosylceramide to glucose and ceramide; the same reaction catalyzed by the β-glucosidase acid 1 (GBA1) defective in subjects with the Gaucher’s form of lysosomal storage disease. We conclude that GBA2 is a glucosylceramidase whose loss causes accumulation of glycolipids and an endoplasmic reticulum storage disease. 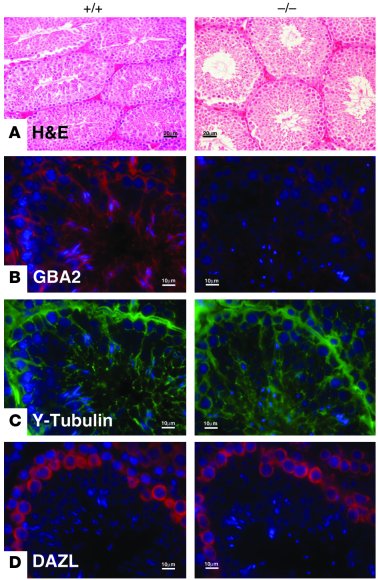