β-Glucosidase 2 (GBA2) is a resident enzyme of the endoplasmic reticulum thought to play a role in the metabolism of bile acid–glucose conjugates. To gain insight into the biological function of this enzyme and its substrates, we generated mice deficient in GBA2 and found that these animals had normal bile acid metabolism. Knockout males exhibited impaired fertility. Microscopic examination of sperm revealed large round heads (globozoospermia), abnormal acrosomes, and defective mobility. Glycolipids, identified as glucosylceramides by mass spectrometry, accumulated in the testes, brains, and livers of the knockout mice but did not cause obvious neurological symptoms, organomegaly, or a reduction in lifespan. Recombinant GBA2 hydrolyzed glucosylceramide to glucose and ceramide; the same reaction catalyzed by the β-glucosidase acid 1 (GBA1) defective in subjects with the Gaucher’s form of lysosomal storage disease. We conclude that GBA2 is a glucosylceramidase whose loss causes accumulation of glycolipids and an endoplasmic reticulum storage disease.

Tissue distribution of GBA2 mRNA and protein and strategy to knock out . 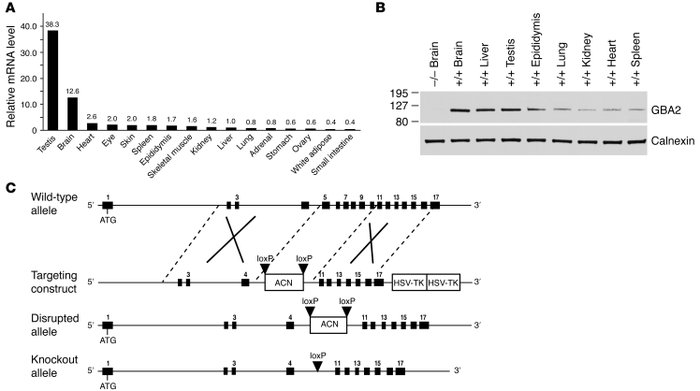 () The relative levels of GBA2 mRNA in the indicated pooled tissues of male mice ( = 6) were determined by real-time RT-PCR. Data were normalized to the threshold cycle value determined in the liver (CT = 28). () Microsomal membranes were prepared and pooled from the indicated tissues (+/+, wild-type; –/–, homozygous) isolated from male mice ( = 6). Aliquots of protein (30 μg) were resolved by SDS-PAGE, transferred to nitrocellulose, and then blotted with an antibody raised against amino acids 1–508 of the GBA2 protein. To ensure equal amounts of protein were examined in each lane, bound GBA2 antibody complexes were removed and the filter was probed a second time with an antiserum raised against calnexin. () Schematics of the wild-type allele, the targeting construct used to induce a deletion mutation by homologous recombination in ES cells, the predicted disrupted allele, and the final knockout allele are shown. Numbered black boxes indicate exons, and ATG represents the initiation codon specified within exon 1. Black triangles indicate positions of loxP sites recognized and cleaved by Cre recombinase. HSV-TK, herpes simplex virus thymidine kinase. ACN, angiotensinogen converting enzyme promoter-Cre recombinase-neomycin resistance.