Mutations in LMNA, which encodes nuclear Lamins A and C cause diseases affecting various organs, including the heart. We have determined the effects of an Lmna H222P mutation on signaling pathways involved in the development of cardiomyopathy in a knockin mouse model of autosomal dominant Emery-Dreifuss muscular dystrophy. Analysis of genome-wide expression profiles in hearts using Affymetrix GeneChips showed statistically significant differences in expression of genes in the MAPK pathways at the incipience of the development of clinical disease. Using real-time PCR, we showed that activation of MAPK pathways preceded clinical signs or detectable molecular markers of cardiomyopathy. In heart tissue and isolated cardiomyocytes, there was activation of MAPK cascades and downstream targets, implicated previously in the pathogenesis of cardiomyopathy. Expression of H222P Lamin A in cultured cells activated MAPKs and downstream target genes. Activation of MAPK signaling by mutant A-type lamins could be a cornerstone in the development of heart disease in autosomal dominant Emery-Dreifuss muscular dystrophy. 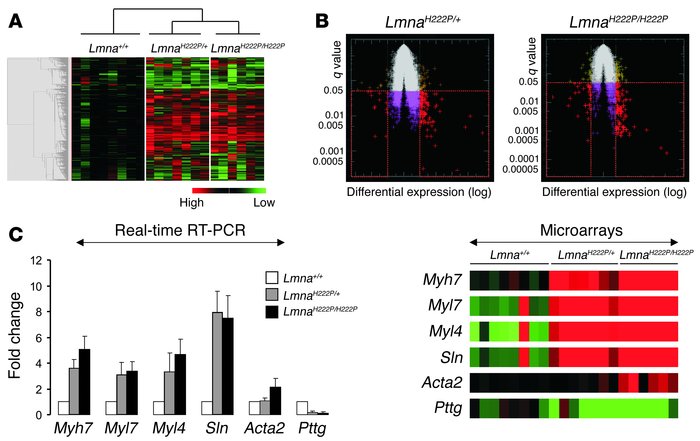 () Hierarchical clustering analysis of differentially expressed genes in hearts from , , and mice. Rows indicate the individual genes expressed and columns indicate each sample. A color is assigned to each gene depending on its expression (red indicates higher expression and green indicates lower expression). Transcriptional profiles of hearts of and mice show a greater degree of similarity to each other than to hearts of control mice. () Volcano plots of absolute expression values (log2[ value]) determined by robust multichip analysis. For each probe set, expression in hearts from and mice is plotted. A 2-fold threshold and < 0.05 were used to determine the probe sets significantly altered in the analysis (red). () Validation of RNA expression profiling of selected genes in hearts from , , and mice using real-time PCR. Bars indicate the fold overexpression of the indicated mRNA in hearts as calculated by the ΔδCT method. Values are mean ± SD for = 6 samples per group. Real-time PCR was performed in triplicate with the different RNA samples. Matrices visualizing Affymetrix GeneChip data of corresponding probe sets of RNAs are shown at right of bar graph. In these matrices, each probe set is visualized as a row of colored squares with 1 square for each sample. , , , , and show higher expression (red) and lower expression (green) compared with controls.