While memory T cells are maintained by continuous turnover, it is not clear how human regulatory CD4+CD45RO+CD25hi Foxp3+ T lymphocyte populations persist throughout life. We therefore used deuterium labeling of cycling cells in vivo to determine whether these cells could be replenished by proliferation. We found that CD4+CD45RO+Foxp3+CD25hi T lymphocytes were highly proliferative, with a doubling time of 8 days, compared with memory CD4+CD45RO+Foxp3–CD25– (24 days) or naive CD4+CD45RA+Foxp3–CD25– populations (199 days). However, the regulatory population was susceptible to apoptosis and had critically short telomeres and low telomerase activity. It was therefore unlikely to be self regenerating. These data are consistent with continuous production from another population source. We found extremely close TCR clonal homology between regulatory and memory CD4+ T cells. Furthermore, antigen-related expansions within certain TCR Vβ families were associated with parallel numerical increases of CD4+CD45RO+CD25hiFoxp3+ Tregs with the same Vβ usage. It is therefore unlikely that all human CD4+CD25+Foxp3+ Tregs are generated as a separate functional lineage in the thymus. Instead, our data suggest that a proportion of this regulatory population is generated from rapidly dividing, highly differentiated memory CD4+ T cells; this has considerable implications for the therapeutic manipulation of these cells in vivo. 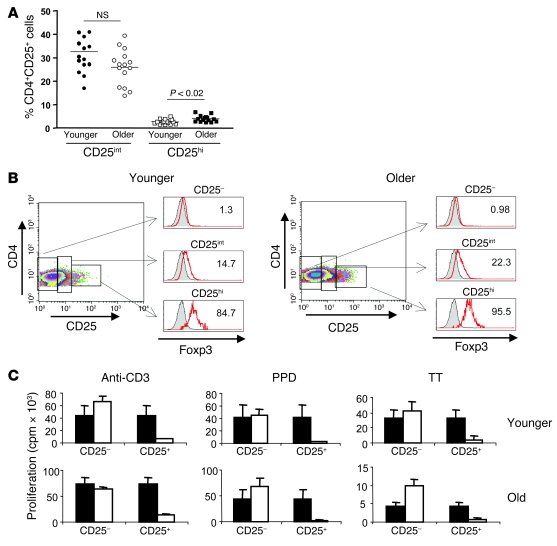 () Freshly isolated PBMCs from younger and older donors were stained with CD4 and CD25 and the percentages of CD25int and CD25hi CD4+ T cells were determined. Statistical significance was determined by 2-tailed, unpaired Student’s test. () The coexpression of CD25 and Foxp3 in CD4+ T cells in older and younger subjects was determined. The left panels show the gating on PBMCs labeled with CD4-PerCP and CD25-PE. Based on CD25 expression, the CD4 population is subdivided into CD25–, CD25int, and CD25hi populations. Histograms illustrate the Foxp3 expression in gated populations (log scale). Filled histograms represent staining with secondary antibody alone. Results are representative of 5 separate experiments performed on younger and older subjects. () Purified CD4+CD25– T cells were stimulated with immobilized anti-CD3, purified protein derivative (PPD), and tetanus toxoid in the presence of autologous irradiated PBMCs as APCs. CD4+CD25– T cells were cultured in the absence (black bars) or presence (white bars) of equal numbers of either CD4+CD25– or CD4+CD25+ cells. Proliferation was measured by 3H-thymidine incorporation on day 3 (for anti-CD3) and day 6 (for recall antigens), and results are expressed as mean ± SEM of triplicate wells. Results shown are representative of 5 experiments performed in younger and older subjects.