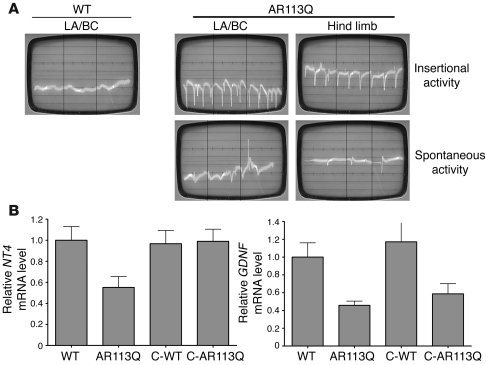 () Composite images from sequential video frames of needle electromyography on levator ani/bulbocavernosus and hind-limb muscles from WT and AR113Q males at 3–5 months. Abnormal spontaneous and insertional activities were observed in both muscle groups of AR113Q males, as indicated by positive, downward deflections of the tracing, but not in WT males. Each horizontal division is equal to 10 ms. () Relative and mRNA expression levels in hind-limb muscle, determined as in Figure . Differences between WT and AR113Q are significant at < 0.05.