The regulation of HSC proliferation and engraftment of the BM is an important but poorly understood process, particularly during ontogeny. Here we show that in mice, all HSCs are cycling until 3 weeks after birth. Then, within 1 week, most became quiescent. Prior to 4 weeks of age, the proliferating HSCs with long-term multilineage repopulating activity displayed an engraftment defect when transiting S/G2/M. During these cell cycle phases, their expression of CXC chemokine ligand 12 (CXCL12; also referred to as stromal cell–derived factor 1 [SDF-1]) transiently increased. The defective engrafting activity of HSCs in S/G2/M was reversed when cells were allowed to progress into G1 prior to injection or when the hosts (but not the cells) were pretreated with a CXCL12 antagonist. Interestingly, the enhancing effect of CXCL12 antagonist pretreatment was exclusive to transplants of long-term multilineage repopulating HSCs in S/G2/M. These results demonstrate what we believe to be a new HSC regulatory checkpoint during development. They also suggest an ability of HSCs to express CXCL12 in a fashion that changes with cell cycle progression and is associated with a defective engraftment that can be overcome by in vivo administration of a CXCL12 antagonist.

All fetal HSCs are sensitive to cell cycle–specific drugs. 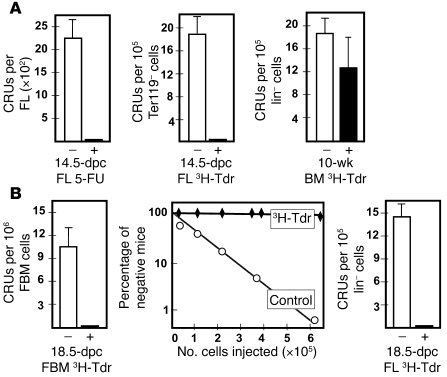 Cells from different mouse embryonic tissues were analyzed for CRU content either 16 hours after injection of the pregnant mother with 100 mg/kg 5-FU (+) or PBS (–) or after in vitro incubation of the cells for 16 hours with (+) or without (–) high–specific activity 3H-Tdr. () Shown are the effects of 5-FU injection on 14.5-dpc FL CRUs (left panel; data pooled from 3 independent experiments) as well as the effects of 3H-Tdr on 14.5-dpc FL CRUs (middle panel) and the lack of effect of 3H-Tdr on CRUs from adult (10-week-old) mice assessed in parallel (right panel; data pooled from 6 independent experiments). () The effects of 3H-Tdr on 18.5-dpc fetal BM (FBM) and FL CRUs (left and right panels; data pooled from 4 independent experiments). The middle panel shows the complete data set from the limiting dilution analysis of the 18.5-dpc fetal BM cells. ** < 0.001.