Schematic depicting the proliferative signaling by nAChRs in NSCLC cells. 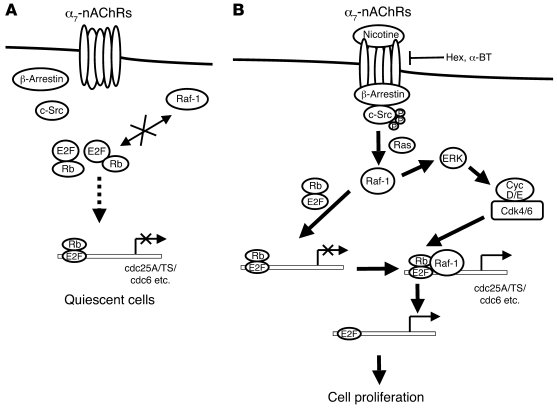 () Quiescent NSCLC cells do not display any association among β-arrestin, Src, and nAChRs. Rb is hypophosphorylated in these resting cells and is associated with E2F transcription factors. Quiescent cells do not show any binding between Raf-1 and Rb. E2F is present on the proliferative promoters but is repressed by Rb. () Nicotine stimulation causes the assembly of oligomeric complexes involving β-arrestin, Src, and nAChRs, facilitating the activation of Src. This leads to the activation of Raf-1, which binds to Rb; activation of MAPK and cyclins/cdks also occurs. The activation of Src facilitates the binding of Raf-1 to Rb, and multimeric complexes containing Rb, Raf-1, and E2F1 occupy proliferative promoters. Sustained mitogenic signaling leads to the dissociation of Raf-1 and Rb, while E2F remains bound to the proliferative promoters facilitating S-phase entry. Ablation of α7-nAChR subunits and β-arrestin–1, inhibition of Src activation, and disruption of the Rb–Raf-1 interaction all blocked nicotine-induced proliferation of NSCLC cells. TS, thymidylate synthase.