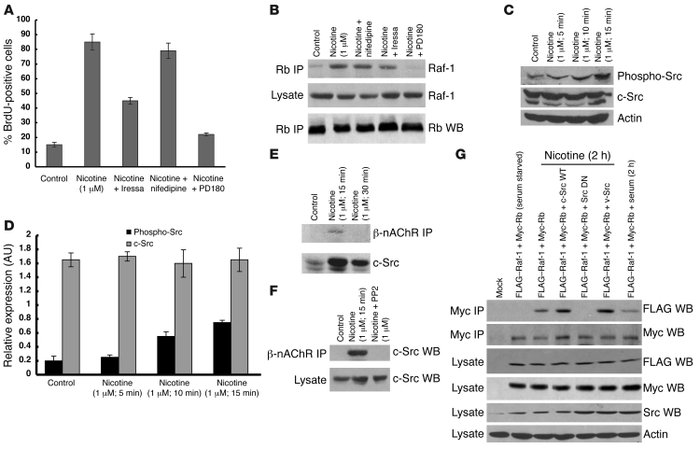 () Nicotine-induced cell proliferation was ablated by 1 μM of the Src inhibitor PD180. The EGFR inhibitor Iressa (1 μM) partially abrogated the mitogenic effects of nicotine, whereas 1 μM nifedipine had no effect. () Treatment with 1 μM PD180 ablated Rb–Raf-1 interaction in A549 cells, whereas nifedipine and Iressa had no effect. () Nicotine induced phosphorylation of Src in A549 cells. () Densitometric analysis was performed to quantitate the results obtained by Western blotting. () Nicotine induced the binding of c-Src to β-nAChRs. Quiescent A549 cells were stimulated with 1 μM nicotine for 15 or 30 minutes, and the binding of c-Src to β-nAChRs was assessed by IP/Western blot analysis. () The binding between c-Src and nAChRs was inhibited by the Src inhibitor PP2. Quiescent A549 cells were stimulated by 1 μM nicotine for 15 minutes in the presence or absence of 1 μM PP2, and the c-Src–β-nAChR association was assessed by IP/Western blot analysis. () Transfection of dominant-negative (DN) Src inhibited Rb–Raf-1 binding, whereas WT or constitutively active Src (v-Src) did not. A549 cells were transfected with the indicated plasmids. Eighteen hours after transfection, cells were rendered quiescent and subsequently stimulated with 1 μM nicotine or serum for 2 hours. Western blot analysis shows the levels of the indicated proteins after transfection.