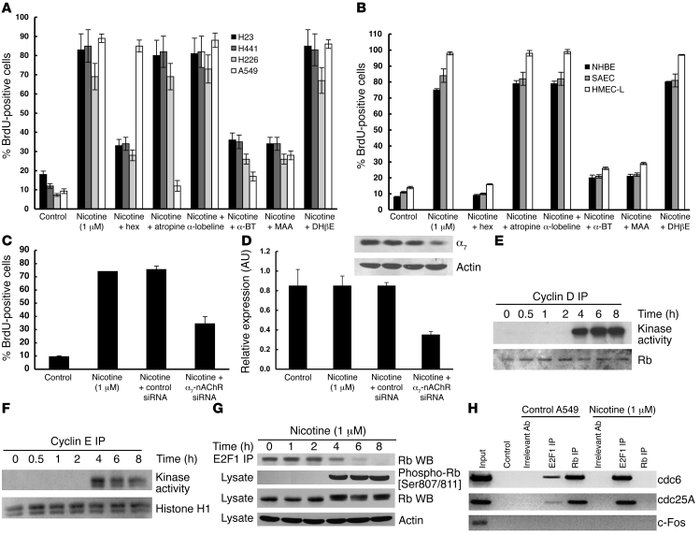 () Nicotine induces S-phase entry. Quiescent H23, H441, H226, and A549 cells were treated with 1 μM nicotine for 18 hours in the presence or absence of a panel of nAChR subunit inhibitors. hex, hexamethonium bromide; α-BT, α-bungarotoxin. () A similar experiment was performed using normal lung cells, namely NHBEs, SAECs, and HMEC-Ls. () Transfection of α7-nAChR siRNA ablated the mitogenic activity of nicotine on A549 cells, whereas a nontargeting control siRNA had no effect. () Western blotting analysis showed that α7-nAChR siRNA ablated the expression of α7-nAChR in A549 cells, which was quantitated using densitometric analysis. A nontargeting siRNA sequence was used as a control for all experiments. () An in vitro assay using full-length Rb as a substrate to measure cyclin D–associated kinase activity in quiescent and nicotine-stimulated A549 cells. The lower panel shows a Coomassie Blue staining of the gel indicating comparable amounts of substrate in all lanes. () A similar assay as in , showing cyclin E–associated kinase activity using histone H1 as a substrate. () Nicotine induces the dissociation of E2F1 from Rb in A549 cells, with concomitant phosphorylation of Rb. WB, Western blot. () Nicotine caused increased recruitment of E2F1 on the E2F-responsive promoter and accompanied by concomitant dissociation of Rb. PCR for the c-Fos promoter was taken as the negative control.