The nuclear receptor family of PPARs was named for the ability of the original member to induce hepatic peroxisome proliferation in mice in response to xenobiotic stimuli. However, studies on the action and structure of the 3 human PPAR isotypes (PPARα, PPARδ, and PPARγ) suggest that these moieties are intimately involved in nutrient sensing and the regulation of carbohydrate and lipid metabolism. PPARα and PPARδ appear primarily to stimulate oxidative lipid metabolism, while PPARγ is principally involved in the cellular assimilation of lipids via anabolic pathways. Our understanding of the functions of PPARγ in humans has been increased by the clinical use of potent agonists and by the discovery of both rare and severely deleterious dominant-negative mutations leading to a stereotyped syndrome of partial lipodystrophy and severe insulin resistance, as well as more common sequence variants with a much smaller impact on receptor function. These may nevertheless have much greater significance for the public health burden of metabolic disease. This Review will focus on the role of PPARγ in human physiology, with specific reference to clinical pharmacological studies, and analysis of PPARG gene variants in the abnormal lipid and carbohydrate metabolism of the metabolic syndrome. 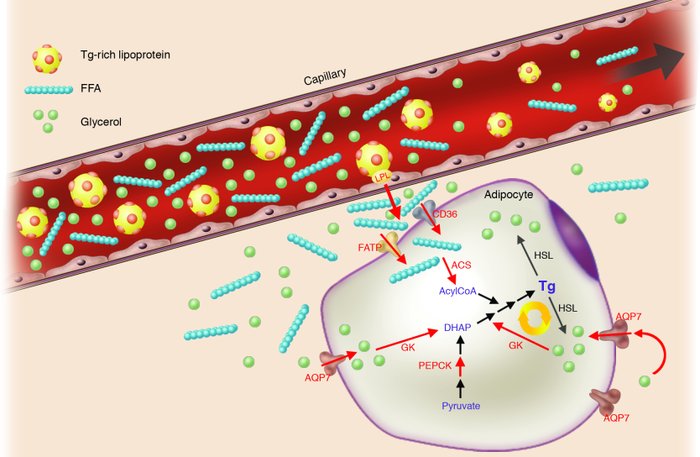 Actions of PPARγ in adipocyte FA trapping. PPARγ upregulates the transcription of genes involved in most stages of FA trapping, some of which are shown here in red. PPARγ enhances lipoprotein triglyceride hydrolysis by endothelial lipoprotein lipase (LPL) and uptake of free fatty acids (FFA) into adipocytes through fatty acid transport protein (FATP) and CD36. PPARγ also modifies triglyceride synthesis, starting with FFA esterification by Acyl CoA synthase. The futile glycerol cycle, recently proposed to be stimulated by PPARγ, is illustrated by the yellow circular arrows, and depends upon glycerol kinase (GK), with aquaporin 7 (AQP7) as the adipocyte glycerol channel. The collective PPARγ actions reduce FFA levels in the venous effluent from adipose tissue, thereby limiting the lipotoxicity of other insulin-sensitive tissues that could result from FFA exposure. PEPCK, phosphoenolpyruvate carboxykinase; HSL, hormone-sensitive lipase; DHAP, dihydroxyacetone phosphate.