In this study we investigated why bloodstream forms of Trypanosoma brucei gambiense cross human brain microvascular endothelial cells (BMECs), a human blood-brain barrier (BBB) model system, at much greater efficiency than do T. b. brucei. After noting that T. b. gambiense displayed higher levels of cathepsin L–like cysteine proteases, we investigated whether these enzymes contribute to parasite crossing. First, we found that T. b. gambiense crossing of human BMECs was abrogated by N-methylpiperazine-urea-Phe-homopheylalanine-vinylsulfone-benzene (K11777), an irreversible inhibitor of cathepsin L–like cysteine proteases. Affinity labeling and immunochemical studies characterized brucipain as the K11777-sensitive cysteine protease expressed at higher levels by T. b. gambiense. K11777-treated T. b. gambiense failed to elicit calcium fluxes in BMECs, suggesting that generation of activation signals for the BBB is critically dependant on brucipain activity. Strikingly, crossing of T. b. brucei across the BBB was enhanced upon incubation with brucipain-rich supernatants derived from T. b. gambiense. The effects of the conditioned medium, which correlated with ability to evoke calcium fluxes, were canceled by K11777, but not by the cathepsin B inhibitor CA074. Collectively, these in vitro studies implicate brucipain as a critical driver of T. b. gambiense transendothelial migration of the human BBB.

Ca2+ oscillations of human BMECs in response to are mediated by papain-like cysteine proteases. 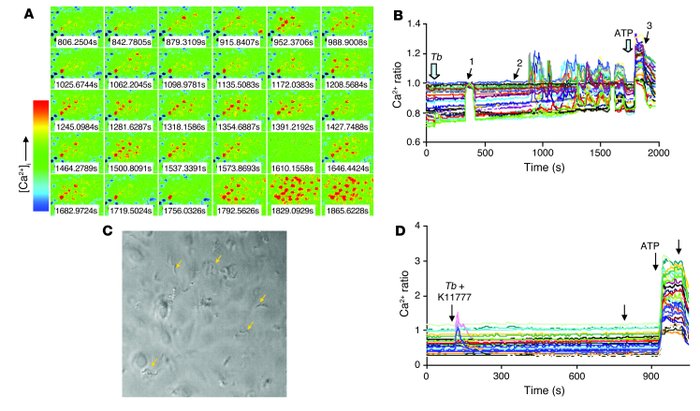 Fura-2/AM–loaded BMECs were mounted on a recording chamber, and 25–40 regions of interest representing individual cells were selected. Cells were exposed to bloodstream forms of (106 parasites/ml) in HEPES-buffered HBSS, and real-time fluorescent images were captured by alternating excitation at 340 and 380 nm. () Time-lapse images of [Ca2+]i changes presented between the time points marked with arrows 2 and 3 in . Increased [Ca2+]i indicated by color change from blue to red. () Kinetics of [Ca2+]i changes. (; 106 parasites/ml) was added where indicated. To show functional integrity of human BMECs after treatment, 10 μM ATP was added at the end of the experiments at 1770 seconds as indicated. () To show the presence of parasites, during Ca2+ measurements a differential interference contrast image was taken at the time point marked by arrow 1 in . Arrows show some of the motile . [Ca2+]i changes were expressed as the 340:380 ratio. () K11777 (20 μM) was added to cells in 0.5% DMSO immediately before addition of parasites, and the variations of fluorescence were measured. DMSO alone had no effect on parasite-induced calcium changes. ATP (1 μM) was added at the end of the recording as a positive control of BMEC integrity. Unlabeled arrows indicate when a change to normal medium was made. Results are representative of 2 independent experiments.