CTL-associated antigen 4 (CTLA4) blockade releases inhibitory controls on T cell activation and proliferation, inducing antitumor immunity in both preclinical and early clinical trials. We examined the mechanisms of action of anti-CTLA4 and a GM-CSF–transduced tumor cell vaccine (Gvax) and their impact on the balance of effector T cells (Teffs) and Tregs in an in vivo model of B16/BL6 melanoma. Tumor challenge increased the frequency of Tregs in lymph nodes, and untreated tumors became infiltrated by CD4+Foxp3– and CD4+Foxp3+ T cells but few CD8+ T cells. Anti-CTLA4 did not deplete Tregs or permanently impair their function but acted in a cell-intrinsic manner on both Tregs and Teffs, allowing them to expand, most likely in response to self antigen. While Gvax primed the tumor-reactive Teff compartment, inducing activation, tumor infiltration, and a delay in tumor growth, the combination with CTLA4 blockade induced greater infiltration and a striking change in the intratumor balance of Tregs and Teffs that directly correlated with tumor rejection. The data suggest that Tregs control both CD4+ and CD8+ T cell activity within the tumor, highlight the importance of the intratumor ratio of effectors to regulators, and demonstrate inversion of the ratio and correlation with tumor rejection during Gvax/anti-CTLA4 immunotherapy. 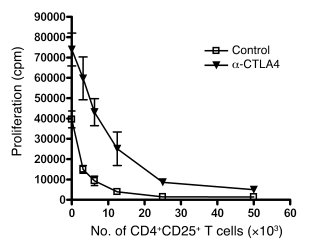 CD4+CD25+ Tregs and CD4+CD25– Teffs were isolated from lymph nodes and stimulated in vitro with irradiated T cell–depleted splenocytes in the presence of 10 μg/ml anti-CD3 in the presence or absence of 50 μg/ml anti-CTLA4 monoclonal antibody. [3H]thymidine was added for the last 8 hours of a 72-hour culture. The data are representative of 3 independent experiments.