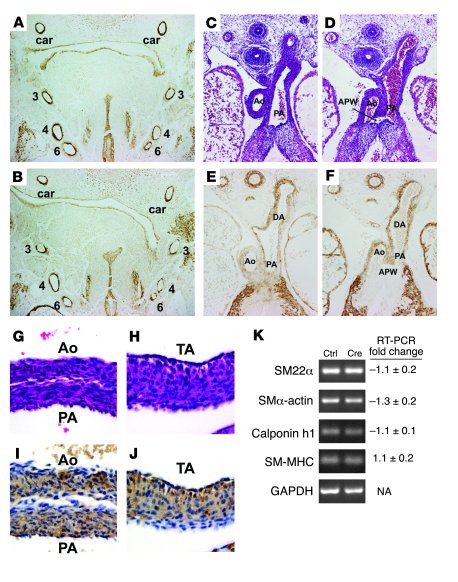 (–) H&E staining (, , , and ) and SMα-actin (SMA) immunohistochemistry (, , , , , and ) of (SMCre–) and (SMCre+) embryos. Original magnification, ×100 (–); ×200 (–). ( and ) Frontal section through the pharyngeal arches in an E11.5 SMCre+ embryo () demonstrates normal formation of pharyngeal arches 3, 4, and 6 and SMA immunostaining in SMCs of the pharyngeal arch arteries and carotid arteries (car) similar to that in a normal SM22Cre– embryo (). (–) In a representative E12.5 SMCre+ embryo ( and ), despite the presence of aortopulmonary window (APW), the structure of the vessel wall and the presence of SMA immunostaining in neural crest–derived SMCs in the vascular wall of the aorta and PA are not different compared with a normal SMCre– embryo ( and ). (–) Cross sections through the vascular walls of Ao and PA of an E18.5 SM22Cre– embryo ( and ) and the vascular wall of the truncus arteriosus (TA) of a SM22Cre+ embryo ( and ) demonstrate similar structure of the vessel wall and presence of SMA immunostaining neural crest–derived SMCs. () Quantitative RT-PCR of primary aortic SMCs infected with Ad-empty (Ctrl) or Ad-Cre (Cre) demonstrates that GATA-6 deletion does not change expression of mRNA encoding SMC-restricted cytoskeletal and contractile proteins. The ethidium-stained products amplified at the cycle threshold for each message and for control GAPDH are shown with the fold change in expression.