We studied the vascular effects of invasive human cytotrophoblasts in vivo by transplanting placental villi to the fifth mammary fat pads or beneath the kidney capsules of Scid mice. Over 3 weeks, robust cytotrophoblast invasion was observed in both locations. The architecture of the mammary fat pad allowed for detailed analysis of the cells’ interactions with resident murine blood vessels, which revealed specific induction of apoptosis in the endothelial cells and smooth muscle walls of the arterioles. This finding, and confirmation of the results in an in vitro coculture model, suggests that a parallel process is important for enabling cytotrophoblast endovascular invasion during human pregnancy. Cytotrophoblast invasion of the kidney parenchyma was accompanied by a robust lymphangiogenic response, while in vitro, the cells stimulated lymphatic endothelial cell migration via the actions of VEGF family members, FGF, and TNF-α. Immunolocalization analyses revealed that human pregnancy is associated with lymphangiogenesis in the decidua since lymphatic vessels were not a prominent feature of the nonpregnant endometrium. Thus, the placenta triggers the development of a decidual lymphatic circulation, which we theorize plays an important role in maintaining fluid balance during pregnancy, with possible implications for maternal-fetal immune cell trafficking. 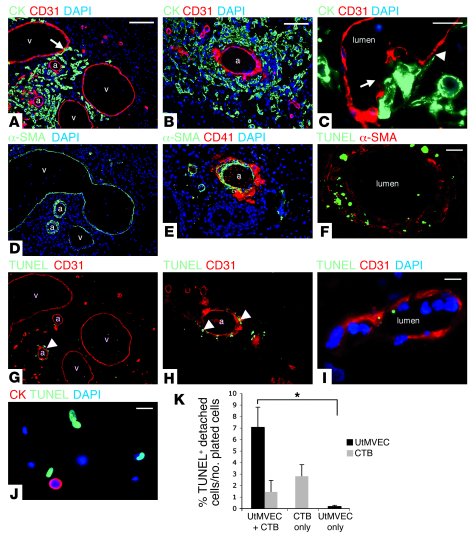