Insulin inhibits glucose production through both direct and indirect effects on the liver; however, considerable controversy exists regarding the relative importance of these effects. The first aim of this study was to determine which of these processes dominates the acute control of hepatic glucose production (HGP). Somatostatin and portal vein infusions of insulin and glucagon were used to clamp the pancreatic hormones at basal levels in the nondiabetic dog. After a basal sampling period, insulin infusion was switched from the portal vein to a peripheral vein. As a result, the arterial insulin level doubled and the hepatic sinusoidal insulin level was reduced by half. While the arterial plasma FFA level and net hepatic FFA uptake fell by 40–50%, net hepatic glucose output increased more than 2-fold and remained elevated compared with that in the control group. The second aim of this study was to determine the effect of a 4-fold rise in head insulin on HGP during peripheral hyperinsulinemia and hepatic insulin deficiency. Sensitivity of the liver was not enhanced by increased insulin delivery to the head. Thus, this study demonstrates that the direct effects of insulin dominate the acute regulation of HGP in the normal dog. 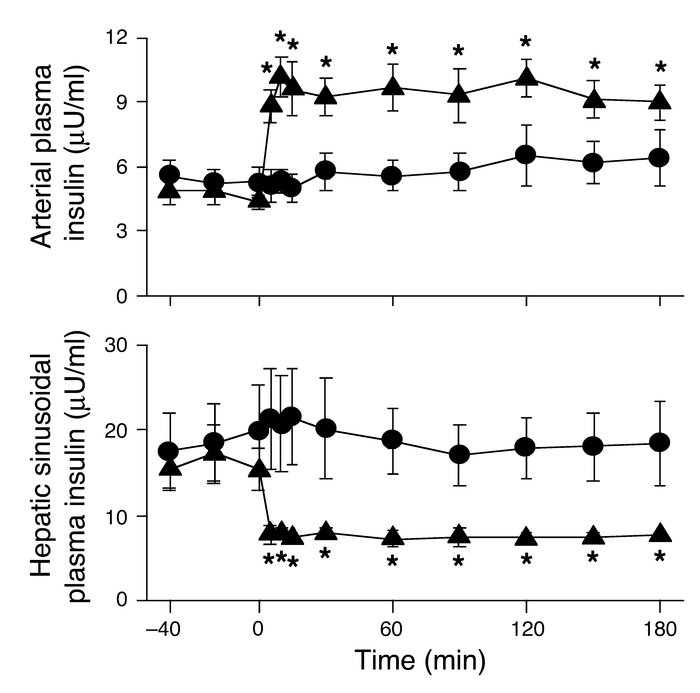 Arterial and hepatic sinusoidal plasma insulin levels in 18-hour-fasted conscious dogs during the basal (–40 to 0 minutes) and experimental (0–180 minutes) periods. Basal insulin infusion either continued into the portal vein (circles) or was switched to a peripheral vein (triangles) between 0 and 180 minutes. Mean ± SEM; * < 0.05 versus portal group.