We used diffusion tensor imaging (DTI) to study 2 patients with traumatic brain injury. The first patient recovered reliable expressive language after 19 years in a minimally conscious state (MCS); the second had remained in MCS for 6 years. Comparison of white matter integrity in the patients and 20 normal subjects using histograms of apparent diffusion constants and diffusion anisotropy identified widespread altered diffusivity and decreased anisotropy in the damaged white matter. These findings remained unchanged over an 18-month interval between 2 studies in the first patient. In addition, in this patient, we identified large, bilateral regions of posterior white matter with significantly increased anisotropy that reduced over 18 months. In contrast, notable increases in anisotropy within the midline cerebellar white matter in the second study correlated with marked clinical improvements in motor functions. This finding was further correlated with an increase in resting metabolism measured by PET in this subregion. Aberrant white matter structures were evident in the second patient’s DTI images but were not clinically correlated. We propose that axonal regrowth may underlie these findings and provide a biological mechanism for late recovery. Our results are discussed in the context of recent experimental studies that support this inference. 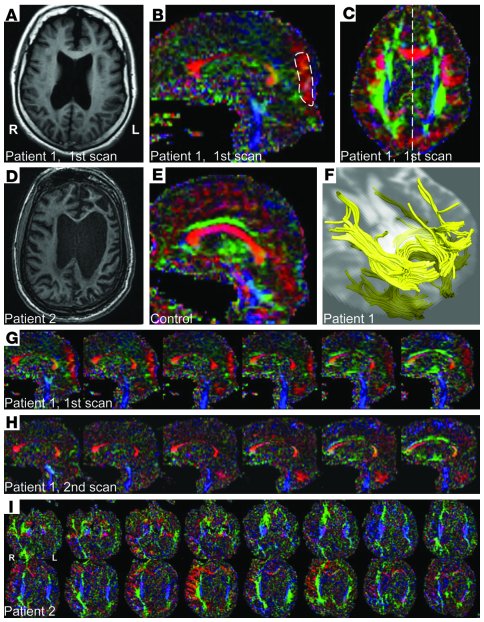 (–) Axial T1-weighted anatomical images (, patient 1; , patient 2), sagittal FA color maps (, patient 1; , normal control), and axial FA color map of patient 1 () corresponding to slice in . Color is composed of red, blue, and green, indexing whether anisotropy is most pronounced from left to right, superior to inferior, or anterior to posterior, respectively. The patient’s MPO ROI is marked by a dashed line in , and the slice position of corresponds to the dashed line in . The normal control subject with the most pronounced anisotropy in the MPO region is identified as a square mark in Figure 2J. () White matter fiber tracts of the patient in the MPO region of the brain, overlaid onto an axial T2-weighted image. () Sequence of parasagittal FA maps of patient 1, first scan. The images are ordered from left to right and the space between them is 1.7 mm. () Sequence of parasagittal FA maps for patient 1 obtained from the second scan, with the same spacing as before. In the second scan, the vermis appears more and the MPO region less pronounced. () Axial FA maps of patient 2. The images are ordered from inferior to superior and have a spacing of 2.5 mm.