HIV-1 directly activates human plasmacytoid DCs (pDCs) by upregulating the expression of costimulatory and MHC molecules and maturation markers, increasing T cell stimulatory activity, and inducing the production of type I interferons and TNF-α. A consequence of this activation is the bystander maturation of myeloid DCs and overall enhancement of antigen-presenting function. However, little is known about the mechanism(s) of pDC activation by HIV-1. Here we demonstrate by in vitro studies that IFN-α production by pDC in response to HIV-1 requires at least 2 interactions between the cell and virus. Initially, envelope-CD4 interactions mediate endocytosis of HIV-1, as demonstrated through the use of inhibitors of binding, fusion, endocytosis, and endosomal acidification. Subsequently, endosomally delivered viral nucleic acids, particularly RNA, stimulate pDCs through TLRs, as activation is reproduced with purified genomic RNA but not viral RNA packaging–deficient HIV-1 and blocked with different inhibitory TLR ligands. Finally, by using genetic complementation, we show that TLR7 is the likely primary target. Viral RNA rather than DNA in early retrotranscripts appears to be the active factor in HIV-1 that induces IFN-α secretion by pDCs. Since the decline in pDCs in chronic HIV-1 infection is associated with high viral loads and opportunistic infections, exploiting this natural adjuvant activity of HIV-1 RNA might be useful in the development of vaccines for the prevention of AIDS. 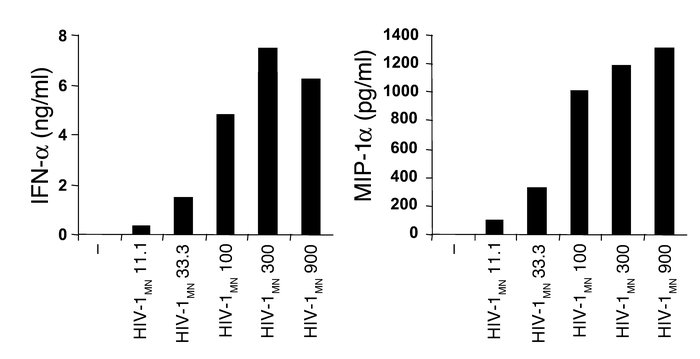 pDC activation in response to HIV-1. BDCA-4+ pDCs were cultured in the presence of various doses of HIV-1MN (ng p24CA/ml). Supernatants were collected after 15 hours and assessed for the presence of IFN-α (ng/ml) and MIP-1α (pg/ml) by ELISA.