CD8+ T cells play a key role in clearing primary virus infections and in protecting against subsequent challenge. The potent antiviral effects of these cells make them important components of vaccine-induced immunity and, because of this, peptide vaccines often contain epitopes designed to induce strong CD8+ T cell responses. However, the same effector functions that protect the host also can be harmful if they are not tightly regulated, and virus-specific CD8+ T cells are a frequent cause of immunopathology. Here, we report that the administration of peptide to virus-immune recipient mice can lead to the synchronous activation of preexisting virus-specific CD8+ T cells with serious, and even lethal, consequences. Mice infected with LCMV or vaccinia virus developed rapid and profound hypothermia following injection of cognate synthetic peptides, and LCMV-infected mice frequently died within hours. Detailed analyses of the LCMV infected mice revealed enterocyte apoptosis and implicated TNF produced by peptide-specific CD8+ T cells as the major mediator of disease. The caspase inhibitor zVADfmk had no demonstrable effect on the development of hypothermia, but diminished enterocyte apoptosis and greatly reduced the number of deaths. These findings, if similarly observed in patients, counsel caution when administering powerful immunogens such as peptide vaccines to individuals who may have a large preexisting pool of epitope-specific CD8+ T cells. 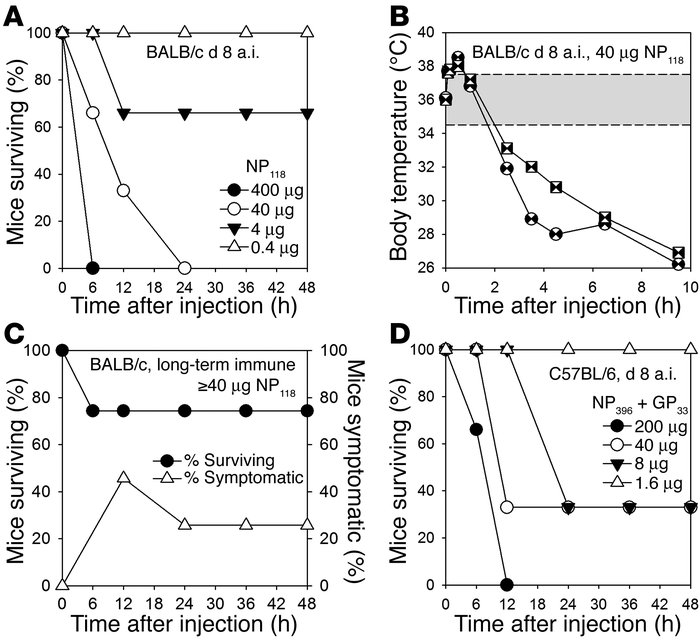 Peptide inoculation can cause lethal shock in infected or immune vaccinees. () BALB/c mice (3 mice per group) were infected with LCMV and, 8 days later, were inoculated i.v. with the indicated amounts of NP118 peptide, and their survival was determined over a 48-hour period. () Two BALB/c mice were implanted with IPTT-100 temperature probes 2 days before they were infected with LCMV. Eight days after infection (a.i.), each mouse was injected i.v. with 40 μg of NP118, and their body temperatures were monitored over the course of 10 hours. () Long-term immune BALB/c mice (a total of 35 mice, in 9 experiments) received NP118 peptide and were observed for survival (circles) and for the development of clinical signs (described in the text; triangles). () An experiment similar to that described in was carried out, this time using C57BL/6 mice, and a mixture of the NP396 and GP33 codominant epitope peptides as described in Methods.