The relative roles of the types 1 and 2 iodothyronine deiodinases (D1 and D2) in extrathyroidal 3,5,3′-triiodothyronine (T3) production in humans are unknown. We calculated the rate of thyroxine (T4) to T3 conversion by intact cells transiently expressing D1 or D2 at low (2 pM), normal (20 pM), and high (200 pM) free T4 concentrations. Deiodinase activities were then assayed in cell sonicates. The ratio of T3 production in cell sonicates (catalytic efficiency) was multiplied by the tissue activities reported in human liver (D1) and skeletal muscle (D2). From these calculations, we predict that in euthyroid humans, D2-generated T3 is 29 nmol/d, while that of D1-generated T3 is 15 nmol/d, from these major deiodinase-expressing tissues. The total estimated extrathyroidal T3 production, 44 nmol/d, is in close agreement with the 40 nmol T3/d based on previous kinetic studies. D2-generated T3 production accounts for approximately 71% of the peripheral T3 production in hypothyroidism, but D1 for approximately 67% in thyrotoxic patients. We also show that the intracellular D2-generated T3 has a greater effect on T3-dependent gene transcription than that from D1, which indicates that generation of nuclear T3 is an intrinsic property of the D2 protein. We suggest that impairment of D2-generated T3 is the major cause of the reduced T3 production in the euthyroid sick syndrome. 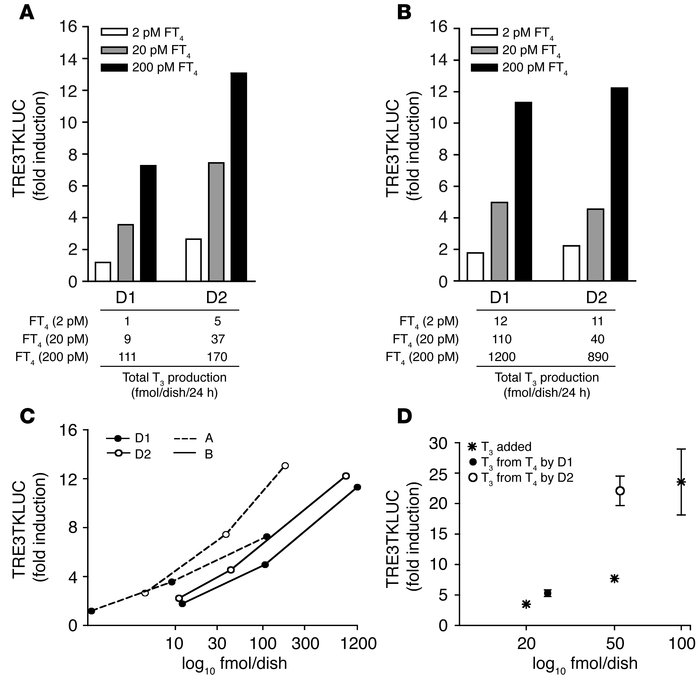 The T3 derived from D2-catalyzed T4 to T3 conversion is more potent than that from D1 in stimulating T3-dependent gene expression. ( and ) TRE3TKLUC induction in D1- and D2-expressing HEK 293 cells. At any rate of T3 production (see tables below graphs), D2-catalyzed T3 production causes greater increases in T3-dependent luciferase (LUC) expression than T3 derived from the D1-catalyzed T4 to T3 reaction. () TRE3TKLUC induction versus T3 production (log10). D2-derived T3 caused greater LUC induction than did D1-derived T3. LUC expression was normalized to growth hormone as transfection efficiency control. () Effects of added T3 and D1- or D2-derived T3 on TRE3TKLUC induction. Cells transfected with inactive D2 were incubated with 1 ml 0.1% BSA DMEM, and the indicated amounts of T3 were added. D1- and D2-expressing cells were incubated in the same medium containing T3-Ab (1:1,000) and 20 pM FT4.