Defects in purine nucleoside phosphorylase (PNP) enzyme activity result in abnormal nucleoside homeostasis, severe T cell immunodeficiency, neurological dysfunction, and early death. Protein transduction domain (PTD) can transfer molecules into cells and may help restore PNP activity in cases of PNP deficiency. However, long-term use of PTD to replace enzymes in animal models or patients has not previously been described. We fused human PNP to the HIV-TAT PTD and found that the fusion with TAT changed the retention and distribution of PNP in PNP-deficient mice. TAT induced rapid intracellular delivery of PNP into tissues, including the brain, prevented urinary excretion of PNP, and protected PNP from neutralizing antibodies, resulting in significant extension of the enzyme’s biological activity in vivo. Frequent TAT-PNP injections in PNP-deficient mice corrected the metabolic disorder and immune defects with no apparent toxicity. TAT-PNP remained effective over 24 weeks of treatment, resulting in continued improvement in immune function and extended survival. Our data demonstrate that TAT changes the properties of PNP in vivo and that long-term intracellular delivery of PNP by TAT corrects PNP deficiency in mice. We provide evidence to promote further use of PTD to treat diseases that require repeated intracellular enzyme or protein delivery.

Role of PNP in purine metabolism and the production of TAT-PNP. 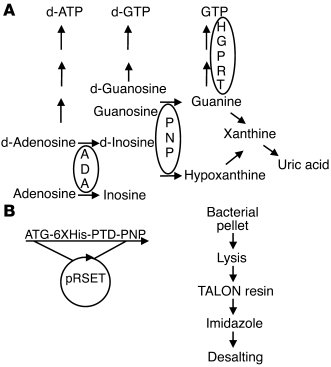 () PNP phosphorylates deoxyguanosine (d-Guanosine) and guanosine to guanine and deoxyinosine and inosine to hypoxanthine, both of which can be further metabolized to uric acid. PNP deficiency results in accumulation of PNP substrates and reduced products such as guanine and uric acid. Defects in purine metabolism enzymes such as PNP or ADA cause severe immune defects. Mutations in hypoxanthine-guanine phosphoribosyltransferase (HGPRT) are associated with neurological abnormalities, similar to PNP and ADA deficiencies. () The coding sequence of the 11–amino acid TAT PTD (YGRKKRRQRRR) flanked by glycine residues was inserted by PCR upstream of human PNP (without the ATG). TAT-PNP was inserted into pRSET vector with an N-terminal Histidine tag (6XHis) and expressed in BL21(DE3). The bacterial pellet was lysed, applied to a resin column, washed, eluted with imidazole, and desalted.