The respiratory tract is a primary site of infection and exposure to environmental antigens and an important site of memory T cell localization. We analyzed the migration and retention of naive and activated CD8+ T cells within the noninflamed lungs and quantitated the partitioning of adoptively transferred T cells between the pulmonary vascular and interstitial compartments. Activated but not naive T cells were retained within the lungs for a prolonged period. Effector CD8+ T cells preferentially egressed from the pulmonary vascular compartment into the noninflamed pulmonary interstitium. T cell retention within the lung vasculature was leukocyte function antigen-1 dependent, while the egress of effector T cells from the vascular to the interstitium functions through a pertussis toxin–sensitive (PTX-sensitive) mechanism driven in part by constitutive CC chemokine ligand 5 expression in the lungs. These results document a novel mechanism of adhesion receptor– and pulmonary chemokine–dependent regulation of the migration of activated CD8+ T cells into an important nonlymphoid peripheral site (i.e., the normal/noninflamed lung). 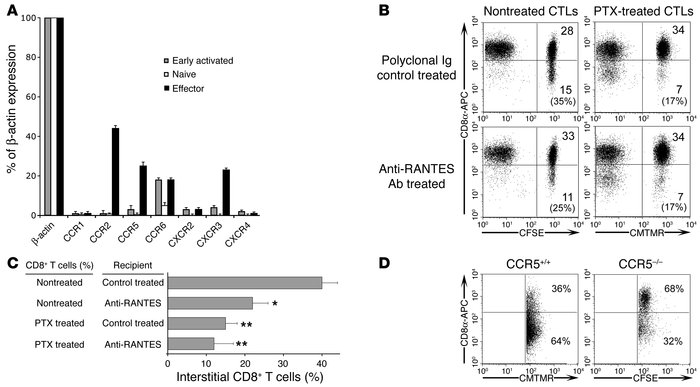